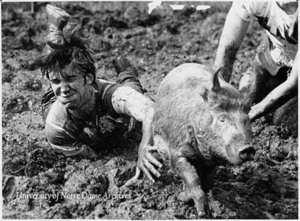 As the end of the semester approaches, students have begun gearing up for a much-needed summer break. Capitalizing on the contagious spring fever, the Student Union Board (SUB) has planned an “AnTostal” celebration that will mark the Board’s 50th anniversary.

“AnTostal was inaugurated in Ireland in 1953 as a celebration of Irish culture and life,” says sophomore Fiona Williams, lead programmer for the event. “It also served the purpose of enhancing tourism and included various parades, competitions and arts events. Though the festival mostly ended in Ireland by 1958, Notre Dame adopted the tradition in the 1960s as a sort of spring festival.”

“I wish I could take credit for starting AnTostal, but it was not me,” says James Brogan, class of 1970. “It was the brain child of my friend Dave Ryan, who was the hall president of Badin and the chairman of the Hall President’s Council.”

According to Brogan, the Badin Hall president’s election was mid-year, so Ron Mastroni was the first chairman of the event — though Dave Ryan was still the guiding spirit.

From these first early days until now, AnTostal has grown to be a consistent tradition on Notre Dame’s campus.

“My best memory of AnTostal is the AnTostal Village event we held last year where there were a bunch of food trucks, caricature artists and we gave away shirts,” Williams says. “Tons of people came out and it was such a fun atmosphere and really is what AnTostal is all about — enjoying the community in the final days of the year.”

Although the events for this year’s AnTostal, held from April 23 to 30, are being kept under wraps, Williams promises an especially great year. In honor of SUB’s 50th anniversary, its leaders are looking to make this year the best one yet. A promotional video will be released within the coming weeks and booklets, detailing the week’s events, will be issued shortly after.

With a history of such events as tuck-ins — where a committee member would tuck a friend into bed and read them a bed time story — to keg tosses and food competitions, the event is bound to draw students from all parts of campus.

“I think this is the best part of AnTostal — getting to see everyone enjoying themselves and taking a break from school to relax and have fun with one another,” Williams says. “It really brings the community together."