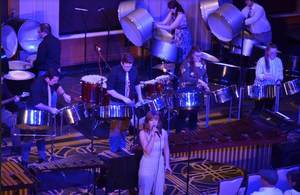 On Friday, Feb. 21 and Saturday, Feb. 22, professors, players and purists of jazz flocked to Notre Dame for the university's annual Collegiate Jazz Festival (CJF). Celebrating its 62nd year of operation, CJF is the oldest jazz festival in the country, collegiate or otherwise. Free to students and $5 for general admission, CJF brings world-class jazz musicians to the South Bend community for a fraction of what their talents normally cost and this year was no exception.

Serving as the judges for CJF were Michigan State University’s “Professors of Jazz,” an elite collection of musicians who have performed alongside Alicia Keys, Paul Simon and Wynton Marsalis.

To call them “judges,” however, is a bit of a misnomer, as CJF is a non-competitive event. Rather than ranking groups and doling out awards, the Professors of Jazz provided constructive feedback to various student ensembles. As is tradition, the professors closed Friday night with “Judges’ Jam,” taking the stage themselves and performing their favorite compositions.

This year marked the first in which CJF was held in Dahnke Ballroom, located on the seventh floor of the Duncan Student Center. Previously, groups performed in Washington Hall, but the trek from Stadium Lot to God Quad was too long of a walk for some patrons. The relocation received a warm reception. “It’s just a beautiful venue,” Larry Dwyer, Notre Dame’s director of jazz studies, said to the South Bend Tribune.

Although CJF did not officially open until Friday, the festivities commenced on Thursday, Feb. 20 with a preview of the performances in Hagerty Family Café. The next day welcomed the first group of student ensembles, including groups from Texas State University, Roosevelt University (including its Latin Jazz Ensemble) and Notre Dame’s very own jazz band.

On Saturday, the roster included Bethel University, two groups from Michigan State, Columbia College’s fusion ensemble and Alma College, the latter of which has brought a percussion ensemble of marimbas, vibraphones and steel drums every year.

While the arts might sometimes seem underrepresented at a university better known for its football talent, the Collegiate Jazz Festival is an enduring reminder of the unique artistic opportunities available to Notre Dame students, as well as to the South Bend community at large.