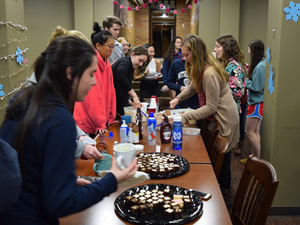 COME ONE, COME ALL Students enjoy the spread after BP's Sundaes on Sunday.

On a chilly Thursday night, many students venture from their cozy dorm rooms in search of a fun night with friends. But rather than leaving campus for a night on the town, some make their way to Dillon Hall’s Thursday night Mass to pray and sip milkshakes.

“We used to use an ice cream company based in South Bend called Bonnie Doon. They had lots of flavors, and we went through everything from peppermint to Blue Moon, but we always came back to Crummy Cookie,” Dillon Hall rector Rev. Paul Doyle, C.S.C. says. “It’s kind of close to Mackinac Island Fudge [which we use now].”

Fr. Doyle was a new rector when he began the Milkshake Mass tradition in October 1997. At the time, Rev. Mike Baxter, C.S.C. was the priest in residence and a popular theology professor on campus; he consistently drew around 20 students to Thursday night Masses for the opportunity to “scope out” a potential theology professor. Wanting to reproduce this “incentive” idea, Fr. Doyle combined his love for milkshakes and a desire to provide a wholesome on-campus social experience to create Dillon’s specialty mass.

Now, Thursday night Milkshake Mass draws a minimum of 250 students to St. Patrick’s Chapel, which seats 165. The RAs churn out hundreds of 16-ounce milkshakes for attendees with the help of heavy-duty, commercial drink mixers.

Dillon is not the only dorm to provide sugary incentives. Breen-Phillips Hall, on the first Sunday of the month, hosts Sundaes on Sunday Mass. After the 8:30 p.m. service the Pen, BP’s basement common room, transforms into an ice cream parlor with residents and guests lining up to create their own sweet creations.

Sophomore BP Liturgical Commissioner Katelyn Markley says the event is always a big success. With the BYOB (bring your own bowl) rule, residents and guests are allowed complete creative freedom with ice cream flavors and a variety of toppings.

“Vanilla is the most popular flavor of ice cream,” Markley says. “The inclusion of Nutella as an extra topping was a very popular new addition this year.”

But if Thursdays and Sundays are too busy, students have a few other alliterative options. Students can head over to Wildcat territory around 10 p.m. on Wednesdays where they will stumble upon Ryan Hall’s Waffle Wednesday Mass.

“Waffle preparation is a team effort,” Ryan Hall Assistant Rector Lillie Romeiser says. “We started making homemade Belgian waffles this year, both chocolate chip and original, and we hope to experiment with some new flavors soon. The most popular way to eat them is the waffle sandwich, complete with Nutella, peanut butter and ice cream filling.”

“Finding time for prayer during the week can be difficult, but setting aside just 25 minutes on Tuesdays helps students to schedule time for God in their busy lives,” Wamsley says. “Duncan Donut Mass is a great opportunity for reflection early on in the week, offering praise to God and enjoying the fellowship of other community-minded people over some delicious donuts.”

Many agree that the high attendance at these smaller-scale Masses is not simply due to the abundance of delicious food.

“We start with Jesus,” Fr. Doyle says about the success of Dillon Milkshake Mass. “I think He’s the one responsible for this, and I am just in awe.”

“The women and men who come to Ryan Hall Waffle Wednesday Mass are not there for the waffles, but for Christ — to pray, to join the life of the community, to grow in faith,” Romeiser says of Ryan Hall’s own success.

As students ready themselves for finals week, know that nearly every day of the week, a quiet, relaxing and welcoming dorm mass is waiting somewhere on campus — along with sugary treats.