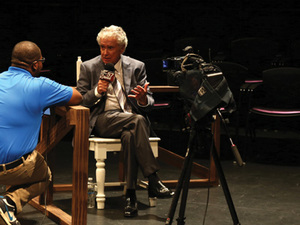 The jocular voice that greets the crowd is all too familiar — for many families across America, it may have greeted them every morning for years. Regis Philbin, who began a speaking engagement at the Browning Cinema of the DeBartolo Performing Arts Center on Sept. 18 to raucous applause, has been on camera more than anyone else in the world, most memorably for morning talk shows like “Live! with Regis and Kathie Lee” and “Live! with Regis and Kelly.”

Philbin told his life story to the audience to explain how he made the climb from a Bing Crosby-singing child, too shy to admit his ambitions to be on television to others, to one of America’s most recognizable media personalities.

He lived in Zahm Hall, graduated in 1953 and then joined the Navy. After the Navy, Philbin worked various odd jobs at NBC, catching producers’ attention with his unique, Bronx-based humor, and eventually was offered a job hosting his first talk show: “All of a sudden, all of these stars are coming from Hollywood to sit and talk with me!”

Philbin’s message to students was clear and repeated in his trademark comically exasperated voice: “I waited all those years! That’s why I’m telling you this! If you want something you gotta go for it, don’t be afraid!”

Philbin’s biggest personal lament was having been too timid to move forward with his secret dreams, wasting years thinking that it would be impossible to become a television star.