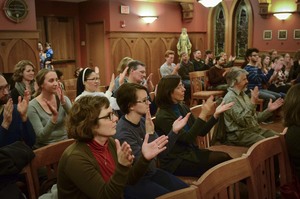 Father Klusman hails from the Archdiocese of Milwaukee and is one of less than 10 profoundly deaf priests in the United States. He visited for a celebration of deaf Catholics hosted by the Office of Human Dignity and Life Initiatives at Notre Dame. In addition to the mass, the festivities included a lecture, “Deaf Catholic History and the First Born-Deaf Priest” and a reception in the Eck Visitor’s Center.

The mass lasted around an hour and was simultaneously signed by Father Klusman and spoken in English by an interpreter. It wasn’t like national anthems at large sporting events, however, where the vocals dominate and the person signing is an afterthought. The hand motions at the altar during the gospel, readings and homily stole the attention of the room, and at times it was easy for hearing people to forget that English was being spoken at all.

The mass concluded with a song performed in ASL by one of the members of the community telling the creation story. It included audience participation, and was told through motions of the whole body. No words were needed to convey the story of the first seven days. The only sounds that could be heard were hands clapping, feet stomping and breath leaving the mouth.