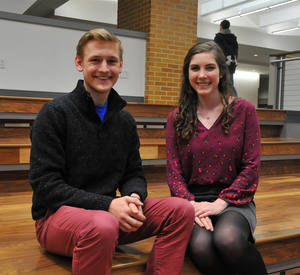 Alex Kruszewski and Julia Dunbar are a team that promise to “tackle the impossible,” and are well equipped to do so.

Individually, both candidates are qualified for the positions for which they are striving. Combined, they boast five years of student government, two years of senate and two years of executive cabinet experience. Their individual work is unique and far reaching; Kruszewski has accumulated experience in finance as a chair of multiple financial initiatives and as executive controller, whereas Dunbar has spent time as a junior class council member, campus life council member and director of the department of health and wellness. It is really as partners, however, that the two shine.

The duo presents a comprehensive plan of action that encompasses many critical student issues. One facet of their ambitious campaign platform is establishing a long-term mental health counseling resource for the university. This initiative, spearheaded by Dunbar, seeks to build relationships with mental health professionals in the South Bend area so that students can more easily access counseling resources. The project will be well supplemented by Dunbar’s prior experience working to enhance university-wide wellness. Another objective of their campaign is to establish a multicultural center that goes beyond the services currently offered by Multicultural Student Programs and Services (MSPS). This building will house resources such as offices for faculty mentors, lounges for diversity scholar groups and diversity programming to enhance recognition of Notre Dame’s diverse student population which, in the words of Dunbar, is a “significant portion of our [student] population” that “deserves a place of prominence.”

While their other goals are notably innovative, Kruszewski and Dunbar's boldest push comes in the form of a promise to lower tuition costs. As executive controller, Kruszewski is well-versed in the university’s endowment plan, and leads a team of undergraduates in the first ever student audit of Notre Dame. As a result, Kruszewski and student government have concluded that a tuition reduction plan directed by students is feasible, and Kruszewski has been working concurrently with administrators to draft a plan to structure endowments for operating expenses.

Although some might posit that Kruszewski and Dunbar’s campaign goals are too lofty, they demonstrate the preparation necessary to tackle all of their plans. The pair has released detailed strategies for every department in the student government and has even thought out their plan for the first week, should they assume office. This plan focuses on the potential to connect with student groups and organize their goals. In addition, they have already met with department administrators who have the ability to execute the platform’s ideas.

Moreover, Kruszewski and Dunbar take their role as representatives of the student body seriously and have actively sought to remain informed on student opinion with their “living platform,” which allows students to directly contact them. They have also reached out to every student club leader on campus for meetings in an attempt to attain a better understanding of each club’s needs and how club integration can contribute to an augmented university community.

Kruszewski and Dunbar’s experience in student government and drive to empower the student body fuel a competent and compassionate campaign.