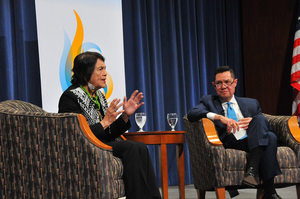 Activist Dolores Huerta — famous for her role in movements for workers’ and women’s rights, among others — was the special guest of the Institute for Latino Studies’ Transformative Latino Leadership Lecture Series at Notre Dame on Feb. 13. Huerta took to the stage crying “Sí, se puede!” (“Yes, it can be done!”), the rallying motto of the United Farm Workers of America. Huerta cofounded the organization with César Chavez; it worked to increase the rights of laborers.

With a motivated and passionate demeanor, Huerta discussed her career as an influential social activist and feminist. Her initial inspiration for this came from a young age when she was growing up in Stockton, California: “My mother was the person I looked up to,” she told the audience. Much of her eagerness also came from being surrounded by seemingly inescapable poverty. Huerta told how, later in life, she and her family had experienced this firsthand: “My children and myself lived like the farmworkers” who survived in such poor conditions that they “had dirt floors.” In her first teaching job, Huerta recalled seeing children of farm workers come to school hungry and with no shoes, and she knew that she needed to do something about the poverty that surrounded her. This was when she decided to begin her lifelong career of seeking social justice and decided that she could make a bigger impact and could “do better work by organizing.”

Huerta described how she began setting up voter registration drives and speaking with local government officials about fixing economic inequality; it was during this time that Huerta met Chavez and began a long-term struggle for the recognition and rights of laborers. Huerta reminisced about working with Chavez saying, “We were much in sync in our goals but we argued about tactics.” She pointed out that they both, however, acknowledged that the struggle for equal rights would be very difficult and slow-moving.

The ongoing struggle has certainly paid off. Since then, Huerta has been instrumental in creating several labor and aid reforms including negotiating Aid for Dependent Families (AFDC), and helping create the Agricultural Labor Relations Act of 1975, which ensures justice and stability in labor relations and allows for the formation of labor organizations. Yet despite all of her impactful contributions, Huerta still doubted herself at times, explaining, “I used to pray that I was doing the right thing.”

Currently, Huerta serves as founder and president of the Dolores Huerta Program — with the intention of creating a network of communities that supports and works with everyday people in order to teach them that they can be the change they want to see. Huerta described how her organization stresses the importance of “teaching people to fight for themselves” and “getting people to believe that they can do that” which is one of her driving philosophies. She explained that the best way to get people to accept help and recognize that they can help themselves is to be sincere: “Once people know you’re sincere, not taking advantage of them, they respond to that,” and will begin to believe in themselves, she said.

Huerta also spoke about how she firmly believes that it is citizens’ duty to their fellow people to offer help and guidance to those who are in need. Huerta called those who attended the event to action, saying, “If you see someone that needs help, you have an obligation to help them.” But she ended her advice by warning, “Don’t expect a reward” for help, as it is something that should be done for others, and not for the praise of oneself.