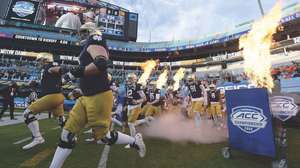 On Dec. 19, the undefeated Fighting Irish arrived at Bank of America Stadium in Charlotte, N.C., marking the beginning of the playoff season for the team. The ACC Championship set the stage for the highly anticipated Notre Dame-Clemson rematch, after the No. 4 Irish defeated the then-No. 1 Tigers during their regular season matchup in South Bend.

Notre Dame started off strong on the opening drive of the game, with kicker Jonathan Doerer ultimately making a 51-yard field goal attempt that put the Irish up early. This was followed by safety Kyle Hamilton intercepting a pass from Clemson quarterback Trevor Lawrence and returning it 14 yards to give the Irish the ball. Coming off this momentum shift, quarterback Ian Book passed to wide receiver Ben Skowronek, gaining 26 yards, which was followed by several runs by running back Kyren Williams, who outsmarted a disoriented Clemson defense for a 24-yard gain. However, when faced with another shot at a field goal after getting the ball in the red zone, Doerer’s second attempt went wide, keeping the score 3-0 in Notre Dame’s favor. Unfortunately, this favor did not last long. Within the next minute of game play, Clemson had scored a touchdown via a 67-yard reception, along with the extra point, putting Clemson up by four.

The different styles of play between the two teams quickly became apparent: while Notre Dame dominated the time of possession, with long drives putting them far into Clemson territory, Clemson’s quick and effective trips down the field made them the early leaders in the game.

The Notre Dame offense was unable to score on its next attempt at the beginning of the second quarter. A completed pass to tight end Tommy Tremble provided a 30-yard gain, with Tremble hopping over a Clemson defender, but an incomplete pass on fourth down to receiver Avery Davis ended the offense’s trip down the field. A second Clemson touchdown followed when the Tigers regained possession, the result of another long pass by Lawrence. The Irish had the ball back, but after a complete pass to tight end Michael Mayer, the bad luck for Notre Dame continued as Book was sacked twice, which resulted in a punt by Jay Bramblett. Another field goal and touchdown later, Clemson remained ahead at the end of the half, the score reading 24-3.

The third quarter began with a series of punts, both teams unable to string together successful plays in order to put points on the board. Book was contained to the pocket, limiting any chance of a run from the quarterback, especially after a sack that cost the Irish 10 yards. Mayer fumbled a pass before regaining possession, but the recovery ended in another punt by Bramblett. With just under four minutes left in the quarter, it was Lawrence who had a 34-yard run for a fourth Clemson touchdown, following several incomplete passes. Book responded with a first-down pass to Skowronek, followed by another short run by Williams. However, the drive resulted in another punt before the end of the quarter.

Clemson added a field goal early in the fourth quarter, but these would prove to be the last points the Tigers would score. Notre Dame fired back with its first touchdown. A Clemson penalty for pass interference aided the Irish in yardage before Book escaped the pocket to throw a first down pass to Skowronek. This was followed by another penalty, this time a personal foul on Clemson safety Nolan Tuner, after an incomplete pass to Mayer. Running back Chris Tyree was eventually able to score an Irish touchdown off a 21-yard scamper.

Even with this late momentum, it was not enough for the Irish to catch up; the final score read 34-10, with Clemson taking home the ACC Championship trophy and the revenge from their loss on Nov. 7.