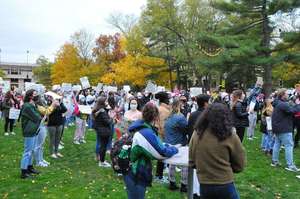 Judge Amy Coney Barrett has brought more press to Notre Dame recently with her nomination and recent confirmation to the Supreme Court on Monday October 26.

Barrett, a Notre Dame Law School alumna, has taught as a member of the Law School’s Faculty since 2002. In October of 2017 she was confirmed as a judge on the U.S. Court of Appeals for the Seventh Circuit.

“I support the confirmation of Amy Coney Barrett because I believe she is more than qualified to serve on the Supreme Court,” said senior Emeline Guenther. “Justice Barrett is someone who I believe will do her job in protecting the freedoms of the American people under the Constitution. President Trump did his job in ensuring her appointment, and I can’t wait to see her future success and positive impact.”

Opinions of Notre Dame students about Barrett range quite widely in the spectrum of support or lack of.

Sophomore Nicholas Crookston opposed the appointment. “Justice Barrett’s clear, fervent, and concise commitment to the Constitution, demonstrated in her hearings, is commendable and worth recognizing. But Republican leadership, which recognized the need for democratic processes to play a role in nominating and confirming justices in 2016, has now disavowed that rule in its petty and swift replacement of Justice Ginsburg in 2020.”

The students are not the only ones to express hesitation at Barrett’s confirmation. Several Notre Dame faculty and professors emeritus signed “An Open Letter to Judge Amy Coney Barrett From Your Notre Dame Colleagues” published October 10, 2020.

The letter congratulated Barrett on her nomination, and it asked her to publicly request that her confirmation be paused and taken up after the election. The letter gave three reasons for this request: the first being that following through with the “fast-tracked” nomination and confirmation process could “deprive the American people of a voice in selecting the next Supreme Court justice.” The second reason involves the recent death of Justice Ruth Bader Ginsburg, and the letter asks that Barrett “repair the injury to [Ginsburg’s] memory” and delay the process in order to grant Ginsburg’s wish of the nomination to happen after the election. The third reason in the letter asks Barrett to acknowledge the context of her nomination, stating that her confirmation “will further inflame our civic wounds, undermine confidence in the court, and deepen the divide among ordinary citizens.”

Professor Pamela Wojcik, Chair of the Film Television and Theatre Department was one of the signatories of this open letter as well as another letter about Barrett’s record and views.

“Because so many Notre Dame law school faculty, and the President of Notre Dame, went to support [Barrett] in the Rose Garden, especially, it seemed that some of the credibility and authority she was granted related to her work at Notre Dame,” Wojcik said. “In signing, I was not only signalling my strong disagreement with the process by which she was confirmed and my strong dislike for her views and her record on issues of race, reproduction and other matters, but also wanted to signal that Notre Dame is not monolithic, that many faculty, staff, and students at Notre Dame do not share her values or approve of the process by which she became a Supreme Court judge.”