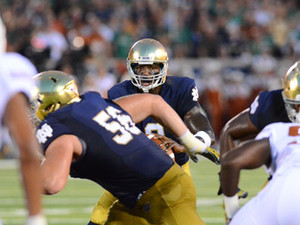 The running joke for the 127th Notre Dame football team was that it was a team with 127 injuries.

The injury curse began at Notre Dame’s preseason training camp. Freshman cornerback Shaun Crawford was out due to a torn anterior cruciate ligament and defensive tackle Jarron Jones tore a collateral ligament.  Tailback Tarean Folston went out in week one with a knee injury.

One of the most devastating blows to the program this season occurred just two games into the season, when Malik Zaire broke his ankle after a blow from a UVA lineman.

During the Boston College game, the second to last game of the regular season, KeiVarae Russell and C.J. Prosise were both sidelined due to injuries.

You can’t help but speculate how the season would have gone with a few less injuries. Would we have secured the win against Stanford? Would we have been at a different bowl game? Would the final bowl game score look a little better?

The hypotheticals won’t change the trajectory of the 2015 season, but the season should provide a warning to next year’s team.

Usually a list this long warrants an examination of the program that has experienced so many injuries. Considering key players sustained season-ending injuries during training, this might call Notre Dame to do an internal examination in the way it trains its athletes.

During its 2014 season, Notre Dame also had a long list of injuries again. The defensive line was particularly hit hard.  Instead of maintaining a solid record of 10-3 like this past season, the 2014 team finished 8-5.

It’s not all bad. DeShone Kizer, who spent the 2014 season as a understudy to Everrett Golson and Malik Zaire, went from back-up quarterback this season to the full-time starter. Though he wasn’t the quarterback everyone had planned on, he proved himself competent time and again.

The opportunity presented to Kizer was also given to several backup players in different positions. Even with a second string line up stepping up to fulltime positions, the 2015 team still proved to be strong.

Notre Dame’s ability to play at a high level, despite injuries taking down many of their starters, speaks to the team’s quality of depth throughout the roster.