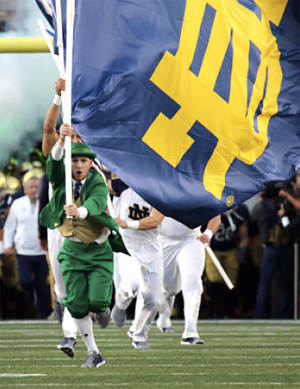 Many ancient religions were rooted in the concept that time is cyclical. Without delving into the intricate nitty-gritties of theoretical temporality, that notion has seeped into our common lexicon (“history repeats itself”) and is inherently understood through repetitive fashion trends (what up, baggy pants and dad shoes), recursive activist movements and inevitably every Friday night/Saturday morning when I find myself gazing over basement Taco Bell’s menu board. Perhaps the greatest testament to redundancy, however, is the recent history of the Notre Dame college football program.

Redundancy is not always necessarily a bad thing. In the most apparent form of mirroring, this 2017 senior class ended their Notre Dame football careers the same way that they began it as freshmen in 2014: beating the LSU Tigers in an exhilarating bowl game. And coming off an eight-loss 2016 season that was about as watchable as season two of Friday Night Lights, undoubtedly, the 2017 season was an improvement.

Last offseason, when head coach Brian Kelly brought in Memphis’ offensive coordinator Chip Long to right the Fighting Irish offense, Long made his philosophy clear: “At the end of the day, we’re gonna be able to run the ball and run the ball to win.” But after a 55-yard rushing output led to a 20-19 loss at home against the future national championship finalists Georgia Bulldogs, fans were left to wonder whether this team was bound to reside under the cloud of late-game heartbreak that had plagued them the year before. Needless to say, it wasn’t.

Primarily on the backs of a seemingly unstoppable rushing game, the nation’s best offensive line, and a defense that re-established its identity in Mike Elko’s newly implemented 4-2-5 scheme, over the course of the next seven games, Notre Dame racked up wins like they were going out of style and in the process treated the Irish faithful to some of the most rewarding aspects of college football fandom. Whether it was tasting that dish best served cold by dominating revenge games against rivals Michigan State and USC (Sam Darnold is haunted by the echoes more than anyone since Clarice in “Silence of the Lambs”) or catching a ride aboard the Heisman candidacy of #33trucking Josh Adams as he Fred-Flinstoned his way through secondaries to the tune of 146.1 yards a game and 8.9 yards a carry, along with eight plays for 59 yards or more, through the first eight games, Notre Dame seemed to have the makings of a playoff contender. But late-season unraveling again proved to be the Irish’s undoing.

The cruelest realization of the contemporary college football season comes the second a fan accepts that his or her team has been effectively eliminated from making the playoffs. For Notre Dame fans, this death blow always seems to be particularly pungent. A particularly rough reminder was 2015, when the blow came at the hands (or, rather, feet) of a last-second kick by Stanford in the regular season finale. The 2016 loss to NC State (but more so to Mother Nature) was a harbinger of the team’s trouble with hurricanes, because, in 2017, it was brash Miami, in all their turnover-chain stunting, that reigned supreme and killed any title dreams harbored by Irish fans.

In the end, although this season ended on a positive note when junior receiver Miles Boykin evaded two LSU defenders to snatch the Citrus Bowl, the game exposed many of the common obstacles that Notre Dame faces seemingly every year and must tackle as it cycles into its offseason of questions. Now that redshirt sophomore Ian Book replaced redshirt junior Brandon Wimbush and played the hero, the Irish quarterback carousel is again back in full steam. How will Brian Kelly replace his graduating and draft-calling stars, especially on offense, as well as his unexpectedly vacant defensive coordinator position? And for the eight-year head honcho, himself fully aware that the gleam of the 1988 champion trophy has lost its luster to Irish fans by now, the seat grows incrementally hotter with each season that fails to deliver on the ultimate goal. Whether time is cyclical or not, it is beginning to feel that way in South Bend, and, inevitably, the time will come where that is not enough.