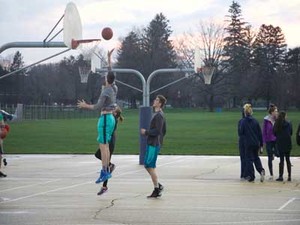 “Fritz Hoefer and Vince Meconi were AnTostaI commissioners for the 1971-72 school year. They wanted more lively activities than the normally boring Keg Toss and Jell-O Wrestling, so they began a basketball tournament.”

That's what a student named Jeremy Dixon wrote in an April 11, 1996 Scholastic cover story, and this month, under the lights on a chilly spring evening, one of Notre Dame’s most cherished traditions continues its 45th run.

Bookstore Basketball, appreciated by students, faculty, alumni and friends of the university alike, has approximately 570 teams this year, ringing in spring and concluding the annual AnTostal festival, as it traditionally has every year since its inception.

Though the athletic competition is — sometimes — fierce, the stories are what have helped to provide Bookstore its charm over the years, connecting generations of university life.

This year is no different. The ninth-seeded Private Law team, steeped in tradition, includes a former Bookstore champion, the Associate General Counsel of the university and a Monogram winner in its lineup.

According to Kelly, the Bookstore tournament still isn’t enough basketball for them. “Most of us … played together this winter on “Law’s Order” in the Grad/Faculty/Staff indoor league.  We lost to former ND basketball player Torrian Jones and the “Accountaholics” in the championship game,” he says.

It isn’t easy facing up against young college students year after year, Kelly says. “We need to stay in shape.” Age, however can have its benefits as well. “The good thing is we usually have a solid cheering section. A number of us have several children, and our kids like to come out and watch,” he says.

This is just one example of how Bookstore transcends positions, degrees and decades. And this tradition finds its admirers and alumni in every facet of university life today.