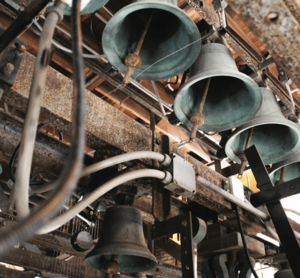 He walked up more than 100 steps — 104, to be exact — before revealing the instruments whose echoes reverberate throughout Notre Dame’s campus.

Rev. Peter Rocca, C.S.C., is just months away from retiring on July 1 as rector of the Basilica of the Sacred Heart. While groups are rarely granted access to venture up the 104 steps to the top of the basilica’s bell tower, Rocca’s offer to do just that was impossible to refuse.

Over the course of nearly 23 years as rector, it is a trip that Rocca says he has made upon request “about 100 times.”

Rocca’s first 33 steps led to a bell weighing approximately six tons, named for St. Anthony of Padua. The bell was historically played by swinging from side to side, but safety concerns arose due to the tower shaking as a result. Now hanging in a fixed position, it tolls on major feast days like Christmas and Easter, as well as funerals, ordinations and on home football Saturdays after an Irish win.

Climbing 55 additional steps, he arrived at a landing with a closet-sized room in the center, comprised mostly by a large keyboard connected to the bells and an accompanying bench. Rocca pointed out that the bells are programmed to play the Alma Mater daily at 10 a.m. and 10 p.m., while playing other devotions and hymns at noon and 6 p.m.

Then came the final climb: 16 steps so sharply inclined that the ascent required approaching them more like a ladder than like stairs. Upon reaching stable footing, the 23-bell carillon — a unified set of bells of varying sizes and pitches — came into view. The carillon inside the Basilica of the Sacred Heart currently is the oldest of its kind in North America.

“The Basilica serves as the heart of what Notre Dame is all about,” Rocca said, “providing a place of prayer and worship for our students, faculty, staff, alumni and visitors whereby faith is deepened and strengthened under the protection and intercession of Our Lady, Notre Dame.”

After his retirement, Rocca will remain a fixture as he helps new rector Rev. Brian Ching, C.S.C., in his transition. As rector emeritus, Rocca will also teach in the Master of Divinity program and serve on the formation staff at Moreau Seminary — where he already serves as director of liturgy and music — and will continue to act as chaplain for Notre Dame’s ROTC program.

One of the primary reasons for Rocca’s continued involvement: a willingness to work with students and be present in their personal development during and after their undergraduate careers.

I would advise students to take advantage of all the many programs and opportunities here,” Rocca said. “At Notre Dame ... they can grow in their faith, be stretched by new experiences and challenges and forge strong bonds of friendship which will last a lifetime.”

After carefully descending the steps from the carillon, Rocca returned to the keyboard. There, he played to perfection the tune so well known by students, faculty, staff and the Notre Dame community as a whole: the Alma Mater.

Inside the Basilica, a mass had begun a short while before he returned to the main level. Rocca gazed in briefly, and a smile appeared on his face. His time as rector has comprised scores of memorable experiences inside the Basilica’s very walls, including baptisms and many notable masses such as the 2015 funeral of former University President Rev. Theodore Hesburgh, C.S.C., and the 2007 beatification of Rev. Basil Moreau, C.S.C.

“The Basilica stirs up within me feelings of praise and thanksgiving,” Rocca said. “Especially for the countless opportunities in which I have been blessed to be a part of peoples’ journeys of faith.”

Having wanted to be a priest since he entered fourth grade in Arlington Heights, Illinois, Rocca’s smile represented something profound: appreciation for the opportunity to fulfill his “dream job” as rector of the Basilica and plenty of excitement for what is to come.