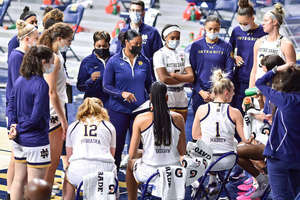 Under the guidance of new head coach Niele Ivey, who took on the role after the retirement of  legendary head coach Muffet McGraw, the Notre Dame women’s basketball team has been hard at work.

On top of assuming a new role, Ivey has also had to face the unique obstacles of leading a team during a pandemic. Nevertheless, in every game the coach and team members have shown dedication, persistence and perseverance. They finished the season 10-9 (8-7 ACC).

Right before the holidays, the team traveled to South Carolina to battle against Clemson. Although they ultimately lost (55-78), they secured their first away victory of the season in Florida against Miami (71-60) on New Year’s Eve.

After the start of the new year, they clinched a revenge victory against Georgia Tech (69-67) at home, yet faced another defeat in Massachusetts against Boston College (61-64).

The Irish downed Pittsburgh and Florida State before falling to Louisville again in the rematch with the Cardinals. Notre Dame enters the ACC tournament as the No. 6 seed and is still in the running to clinch an NCAA tournament berth with a strong performance in Greensboro.