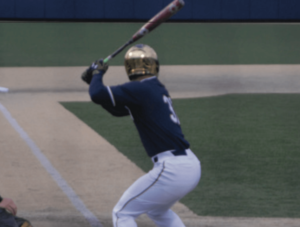 Although the team will return more than 30 players from last year’s roster, Link Jarrett will be one of many new faces in the dugout for the 2020 Notre Dame baseball season. In mid-July, athletic director Jack Swarbrick announced that Jarrett had been hired as the new head baseball coach upon the departure of head coach Mik Aoki.

Immediately after the hire, Swarbrick expressed high praise for Jarrett in a press release, saying his “passion for teaching young men through baseball matches perfectly with the mission of Notre Dame Athletics.” Swarbrick continued, “Link brings a remarkable baseball pedigree to the job as an elite player, an assistant coach with some of the country’s best collegiate programs, a highly successful head coach and even as a parent of a current college baseball player.”

In the nine seasons that Aoki was at the helm of the Fighting Irish baseball team, the team made just one appearance in the NCAA Tournament and did not win a single ACC Tournament. Aoki’s dismissal came as no surprise because of his .404 regular-season win percentage and inability to win games against ACC opponents, especially Louisville, going 1-21 against the Cardinals in the last nine seasons.

Although baseball is not considered one of Notre Dame’s most successful athletic programs, the Fighting Irish did make it to the NCAA Tournament 12 times between 1992 and 2006, but have recently struggled in one of the most difficult conferences in collegiate baseball after switching from the Big East to the ACC in 2012.

In a sport dominated by southern and west coast teams, the Fighting Irish have struggled to recruit players away from powerhouses in the SEC and Pac 12, but Jarrett has seen great success at universities in the south and plans to rebuild the baseball program into a competitive force within the ACC.

Jarrett spent the last seven seasons as the head coach of the University of North Carolina at Greensboro Spartans, leading the program to its first NCAA Tournament in over two decades in 2017 and amassing more than 34 wins each of the last four seasons. In five of the seven seasons he was at UNCG, his teams led the Southern Conference in hitting, a much-needed remedy for the Fighting Irish who have struggled to put runs on the board.

The Notre Dame baseball team will need Jarrett to resurrect an offense that scored almost 100 fewer runs than their opponents last season, but Jarrett is more than ready for the challenge.

After Jarrett was hired, he said, “I want to build this program into one that will contend for championships in the ACC. We have to work tirelessly to upgrade everything that we do in our program. I want this program to be a model of consistency and excellence in college baseball.”

While these are certainly lofty goals for the baseball team to reach next season, Jarrett will lead a team that was .500 in the ACC with just eight games to play before falling apart down the stretch. The talent is certainly there for the Fighting Irish to improve on their 24-30 record last season, but it is likely that the process of rebuilding the baseball program will take at least a few years as Jarrett’s system begins to be integrated.

Just before school started in August, Jarrett announced the completion of his coaching staff with the hires of Rich Wallace as an assistant coach and Scott Wingo as a volunteer assistant. Both men bring a deep knowledge of baseball as well as many years of experience in collegiate and professional baseball to the Notre Dame coaching ranks.

As the baseball program looks ahead, it is undoubtedly in experienced hands. Notre Dame baseball fans anxiously await the 2020 season in hopes of a return to the level of play displayed throughout the early 2000s.