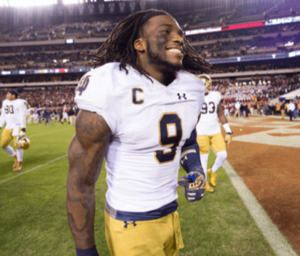 In the student section sea of blue, gold and green flashed a streak of purple. The Baltimore Ravens jersey may have seemed out of place if it weren’t for the last name on the back, a homage to one of the players responsible for Notre Dame’s College Football Playoff appearance last season. Recently departed Notre Dame receiver Miles Boykin has been building his NFL profile in his rookie season with the Ravens. Here Scholastic profiles Boykin’s emerging career and other Irish players making their names in the NFL.

Boykin’s debut stat line featured a five-yard touchdown grab, though he only played 23% of snaps in his first game. He saw the field more in week two, playing 48% of snaps, but finished the contest with only one reception on three targets. After being targeted once the following week in a 33-28 loss to Kansas City, Boykin had what may prove to be an early breakout game in week four, tallying three receptions for 32 yards and a touchdown. He seems to be connecting with quarterback Lamar Jackson, which bodes well for the rest of Boykin’s rookie year.

Smith has shown he’s worth the $64 million contract he signed in the off-season, leading the Cowboys with 36 tackles through week four. His 27 solo tackles tie him for the fourth highest in the NFL, and he has emerged as the clear leader for the Cowboys defense in the team’s 3-2 start.

“Even going back to when I first got to Notre Dame, I was so impressed at just his size, his ability to move,” LaFleur said in a press conference. “He is an elite player and a guy that we’ve got to account for at all times because he’s not only good in the run game, he’s good in the pass game, he’s good as a blitzer, so I think he’s a complete football player.”

After a fairly inconsistent 2018 season, Fuller has been on the field for over 91% of the Texans’ offensive snaps and has recorded a season-high 69 receiving yards. In addition to that performance, Fuller tallied 51 yards on five receptions in the Texans’ week three matchup against the Chargers. Fuller caught three touchdown passes from Deshaun Watson against the Atlanta Falcons and finished the game with a career-high 217 yards receiving.

These three are some of their former teammates, they are some of the most dominant representations of the Irish in the NFL. Martin, McGlinchey and Nelson, offensive linemen for the Dallas Cowboys, San Francisco 49ers, and Indianapolis Colts, respectively, are three reasons that Notre Dame has consistently had a solid claim to “O-Line U,” one of the most sought-after nicknames in college football. McGlinchey is currently ranked as the top pass-blocking offensive tackle in the NFL, sustaining his blocks for at least 2.5 seconds on 98% of plays and doing his part to help the 49ers to their 4-0 record.

LaFleur also has a former Notre Dame player on his roster, but St. Brown is sidelined for the 2019 season with an ankle injury. At the end of his rookie campaign in 2018, he held the No. 3 receiver spot for the Packers but rarely broke 20 receiving yards.