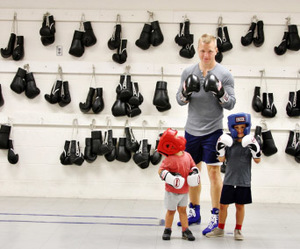 Harrington with his sons, Connor and Ryan. (Photo courtesy of Katrina Harrington)

Chris Harrington isn’t so different from most Bengal Bouts participants. He’s a talented athlete, he’s passionate about helping the Holy Cross Missions in Bangladesh and he loves being a student at Notre Dame.

But while most boxers will be graduating sometime in the next three years, Harrington earned his undergraduate Notre Dame diploma in 2008.

“A lot of people think I’m like an upperclassmen undergrad, so they’re always surprised to hear that I have kids,” Harrington, 30, said. “There’s a lot of grad students, and some of them are older than me, but as far as guys that are left in the tournament, I think I’m probably the oldest guy left.”

Harrington received a degree in biology and worked in Chicago after graduation, starting in pharmaceuticals before transitioning to a sales consulting role for a small cardiovascular imaging company. But although those experiences were valuable, they weren’t what he felt called to do.

At the urging of his wife Katrina, Harrington eventually accepted a job in the Notre Dame development office that allowed him to take part-time theology classes. Three years ago, Harrington began on a path to acquire a Master of Divinity. 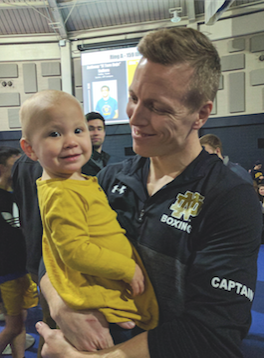 Harrington with his daughter, Elise.

Harrington was always interested in Bengal Bouts, but his commitment to the club rugby team made boxing unmanageable as an undergraduate. A fractured orbital injury prevented him from competing last year, meaning that this will be his only chance to compete in Bengal Bouts before graduating in May.“My theology and philosophy classes were my favorite as an undergrad, but my parents were pretty set on me doing a STEM degree, so I did that,” Harrington says. “And it’s been really helpful and practical, but that’s not where my passion was. I really felt a call to work in Catholic education.”

“I worked a lot in the offseason because I knew this was going to be my one chance to see how good I could be,” Harrington said. “I’m a really driven person, so I wanted to take full advantage.”

Harrington did just that, winning his first two fights after being seeded third in the 174-pound weight class. He lost in the semifinals by split decision to Jack Shepard, a fellow graduate student. Harrington’s most enthusiastic supporters at his fights have been Katrina and their three children: Ryan (five), Connor (three) and Elise (eighteen months). Ryan and Connor work helping their mom to earn money to buy tickets, and Elise is responsible for Harrington’s ferocious boxing nickname, “Dada.”

Harrington met Katrina when they were both students at Notre Dame, and they got married in the Basilica of the Sacred Heart after graduation. Katrina now creates and sells religiously-inspired artwork online.

“There’s no way I could do it without her. She’s been amazing,” said Harrington. “She knows how much I love it and how much it means to me, and it’s really helped me to grow a lot as a person on a lot of levels. It’s made me a better person and father.”

On top of a full load of classes, Harrington helps with Katrina’s business and works part time at both Hesburgh Library and St. Joseph Regional Medical Center.

But school, work and boxing all take a back seat when it comes to being a dad.

“On Friday nights we have fish tacos and watch a family movie together,” Harrington said. “Sunday mornings we wake up at 7 or 8 a.m., and we bike to mass with the kids. There’s bedtime. I put the kids down and sing them songs and read them stories and stuff.”

“So that stuff is really different [from undergraduates], but I think sports, boxing, its kind of like a universal language.”

Harrington’s post-graduation plans are uncertain, but among his options are working in the student administrative realm of higher education, attaining a PhD and becoming a professor, and going with Katrina to South America to teach in Catholic secondary schools.

Regardless of the outcome of the tournament, Harrington feels grateful for the opportunity to form friendships with his teammates and make a tangible impact all the way across the world in Bangladesh.

“Maybe the most important thing about the mission is like half the guys are done after the first round. So if it’s just about you and how well you do in the Bouts, it’s not going to satisfy,” Harrington said.

The Bengal Bouts finals are Friday at 7 p.m. in the Purcell Pavillion. Tickets are $7 for students, and $10 for the general public.