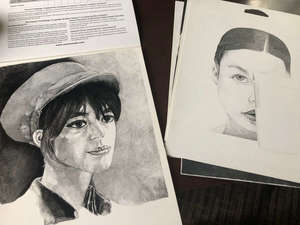 Thousands of fine black dots cover the heavy beige paper which, when viewed from far away, morph into a portrait of a mischievous-looking woman with a black hat and gloves. The drawing technique, known as stippling, requires a good plan and endless patience.

His name is arguably as majestic as his creations: Maclovio Cantu III. However, to the 140 or so residents of Sorin College who see him every day, Cantu, the dorm’s maintenance man, is simply known as Mike. For the past two years, Cantu has worked as the head custodian of Sorin while assisting with cleaning services in other dorms. But his presence at Notre Dame and in the South Bend community goes back much further.

Cantu hails from Mercedes, Texas, in the Rio Grande Valley. “100%, maybe even 101%, Texan,” he said proudly. He was the second of eight children, seven boys and one girl. In 1979, he and his family moved to South Bend where his mother had family ties. It was here that Cantu met his now wife of 35 years.

“I think it was at a quinceañera — when a Latin girl turns 15 — and it was one of those ‘saw her across the room’ type situations,” he laughed. “Very romantic.”

Cantu said that they started dating soon after. The couple married in 1985 and had their first child, a daughter, in 1986. He said he now has three children, all of whom have returned to their father’s home state of Texas despite being born in South Bend.

Cantu’s work life has also involved long commitments, racking up 13 years in different branches of the military. He joined the Indiana Army National Guard as a medic in 1981, completing boot camp at Fort Sill in Oklahoma and then medical training in San Antonio, Texas.

“That was awesome,” said Cantu. “Not only were they teaching me how to fight, but to have this medical MOS, Military Occupational Specialty, it meant I got to save people.”

Cantu said his job as a civilian, an overhead crane operator, translated into the skills he needed in his most recent military stint as a heavy equipment operator in the U.S. Navy.

“Basically anything with wheels, I had to be able to do,” he said.

Cantu was deployed twice with the Navy, in 2002 and 2003, before finishing up his time on active duty and joining the Portage Fire Department. It was this job that led him to the university, after a friend in the Notre Dame Fire Department recommended him as a volunteer in 2006. Cantu said he has worked on campus ever since, moving to maintenance work at the Morris Inn in 2010 and finally starting in Sorin in 2018.

Cantu said that he feels at home in the old building, built in 1889, that he cleans almost every day.

“I love it here: the community, the history, the character,” he said. “You don’t have all of the bells and buzzers like all of these fancy dorms, but we’ve got something that it was built on, and that’s the culture.”

The middle-aged maintenance worker, clad in a blue uniform and Sorin face mask, greets each dorm resident by name as he pushes his cart through the halls. He pauses his music (“I’m a metal guy, if you can imagine that,” he chuckles while stroking his long grey beard with tattooed arms) to ask about their weekends. But hiding dormant inside Mike the custodian is Mike the veteran. Mike the husband and father. Mike the artist.

Like the dots of Cantu’s drawings, the only way that a picture of the university comes together is through the efforts of the individuals that keep Notre Dame running. This year more than ever, these behind-the-scenes movers deserve to be recognized not only for the sacrifices and risks they incur on behalf of the student body, but for their simple existence as human beings.