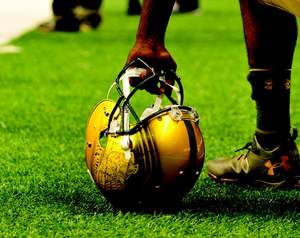 Most Notre Dame students know Malik Zaire as the senior quarterback who wears the number eight, a dynamic athlete with strong running skills and a passion for his sport. Throughout his career with the Irish, he has played in 17 games and represented Notre Dame on a national level both on and off the field. Zaire’s passion and leadership qualities made him a symbol of the University itself when he received extensive coverage in Showtime’s 2015 series, A Season with Notre Dame Football.

But Zaire’s career has been far from free of setbacks. After Zaire’s stellar performance in the 2015 Texas game in his junior year, he sustained a devastating ankle injury while facing off against Virginia in the following week. The injury kept him off the field for the remainder of the season, and it represented an emotional setback for the team. Zaire’s recovery was prolonged and difficult, and he never recovered his starting position with the team.

Zaire now faces a choice — stay on with Notre Dame for one more year, or transfer to another university to play for one year as a graduate student. Both Zaire and his family agree that the choice is clear: Transferring will allow him more time on the field than if he would have stayed at Notre Dame. Zaire, who graduated a few weeks ago, has been considering Wisconsin, Baylor, Florida and North Carolina and plans to make his final decision in April.

Sports editor Juan Jose Rodriguez spoke to Zaire this month. Their conversation has been condensed and lightly edited.

JJR: I’ve read that you plan on waiting to choose a school until the spring. What are your reasons for making this decision at a later point in time?

MZ: I get a chance to really just be selfish, be selfish for myself and really focus on football for my fifth year, rebuild and really get myself together, to be able to finish as strong as I can going into my last year. I think it was the best decision for me because I don’t have to be [wherever I go] specifically for school, for a semester I can focus on what I want to do and where I’m going moving forward, and hopefully continue on to a professional career.

JJR: What are some of your plans, both athletic and/or academic, after completing your transfer? Is there an aspiration to play professionally after college?

MZ: Yeah, that’s definitely the goal. I’m taking this semester off to be able to really finish strong and get to that point where when I finish that final year I can make that push to go into the league... From that standpoint, I need another year. I need some more work to get ready for that opportunity that I didn’t really get a chance at Notre Dame. So that’s why this is a big year for me and I’m excited to be moving forward in that direction.

JJR: What has been your favorite part of playing for Notre Dame? What have been your greatest challenges?

MZ: My favorite part has definitely been playing with the guys that I came in with. Notre Dame is a unique team in the sense that everybody on the team … it’s like a brotherhood. We’re really close and I made a lot of good friends, especially [former Irish players] Louis Nix and Stephon Tuitt. So taking advantage of those few opportunities that I had gotten and doing well is living the dream in a sense. It was everything I could’ve imagined. And I’m glad for the opportunity to play the best that I can, at a high level and I look back on that with gratitude. And of course just playing on that field is a special opportunity in and of itself.

JJR: What were some coaches that, as you look back on your time at ND, you think of as instrumental to your growth and development?

MZ: I think a lot of the coaches that I’ve been around had a big influence on me. Like [Irish offensive line] Coach [Harry] Hiestand and [quarterbacks] Coach [Mike] Sanford are probably two of my favorite coaches that I’ve had, and they really influenced me to be more of a consistent player. I really appreciate those lessons, from my first start and then going through what I did last season. Those are two that I could always rely on.

JJR: What was it like appearing in Showtime’s special on ND football in 2015?

MZ: (Chuckling) It was different. You see a lot of reality TV shows on MTV and other places, but I think this shed light on what it’s like to truly be part of a brotherhood or a close football team and see the daily routine.

JJR: How has your time at Notre Dame affected your goals and plans for the future?

MZ: [My time at Notre Dame] was a good opportunity for me, the challenges and things that I went through at Notre Dame made me a better player and a better person, even though the results weren’t what I wanted. But the things that I’ve learned going through that and continuing to find ways to grow as a quarterback as well as grow as a teammate and as a leader, through those different adverse positions that I was in, that’s something that I think is unique in itself that I can’t really find anywhere else. As well as being able to stick through that and come out on top is something that makes me grow more as a person than if I were a four-year starter and play every game and not go through the same kind of adversity. The uniqueness of what I went through is something that I feel like I’ll carry with me the rest of my life and helped me grow as a person and as a man.