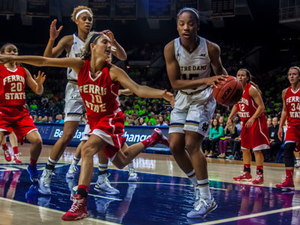 The Notre Dame women’s basketball team consistently wins. Last season marked the fourth runner up title the team has received in the past five years.

The Notre Dame women’s basketball team has begun its 2015-2016 season with similar success. Already 7-0 and ranked No. 3 nationally, the women’s team shows promise for the coming season and NCAA tournament deep round potential.

The top ranking for the team comes as no surprise, given that Notre Dame has been ranked in the top 10 of the Associated Press poll for 101 of the 112 weeks since 2010. This is a record only eclipsed by one other women’s basketball team, the University of Connecticut.

But can this team’s early success continue to live up to the tradition of excellence?

Only weeks into the season, the team already has a slew of injuries. Forward Brianna Turner, the preseason ACC women’s basketball player of the year, is currently out with a right shoulder injury. As of Dec. 2, head coach Muffet McGraw said it is uncertain when she would return to play. Turner may have surgery, which would put an end to her season.

Forward Taya Reimer has been battling an Achilles injury since last year. As of now, she is cleared to play but is not expected to participate in every game.

“The Achilles is a pretty tough thing to handle,” McGraw said in an interview with ND Insider. “She will not be able to go every day.”

Despite these setbacks, the 2015-2016 team is well equipped to excel. The team is rich in experience, with 10 returning members out of 13 players this year.

Even the three new so-called “rookies” bring essential skills to the team. One of the freshmen is guard Marina Mabrey, who was recently selected as the ACC Rookie of the Week on Nov. 30.  She currently ranks second in the ACC in steals.

McGraw recognizes the talent in this rising star.

“[Mabrey’s] someone who wants to play and prove she deserves to be out there,” McGraw said in a media release.

Guard Madison Cable has also proven to be a key player this season, setting a career high of 25 points against Ohio State.

Kevin McGuff, head coach of Ohio State, raved about Cable’s performance. “She’s as good a shooter as there is in college basketball,” he said.

Ultimately, Cable’s performance, along with her teammates, helped the team secure a 75-72 victory against No. 10 ranked Ohio State.

Despite the victory against one of the team’s stronger competitors of the season, McGraw continues to see room for improvement.

“We made some errors that we just don’t usually make, turning the ball over, missing a lot of [three pointers],” McGraw said after the game.

Upcoming games both in and out of conference play represent an opportunity for the Irish to prove that they are once again a serious contender for the 2016 NCAA Championship.