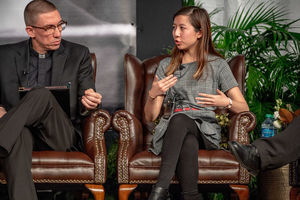 There’s electricity in the air whenever discussing the remarkable life and resounding effects of Dr. Martin Luther King Jr. For the fourth consecutive year, the campus celebrated its unique shared history with the late reverend with a Walk the Walk Week that took place from Jan. 20-26. The guiding principle behind the effort this year was the promotion of community inclusivity.

The week’s events began shortly before midnight on Sunday, Jan. 20 with a commemorative candlelit prayer service in the rotunda of the Main Building. The following morning, Black Lives Matter movement co-founder Opal Tometi delivered speeches and held Q&A sessions for both faculty and student audiences. Adding a visual representation of Dr. King’s life work, the Snite Museum of Art offered a gallery featuring photos from the Civil Rights Movement, including those of his October 1963 speech given at the university.

The capstone event, however, was a celebration luncheon on MLK Day that featured a panel discussion of faculty and students on the topic “A Call to Love: Bridging the Racial Divide.” The normally informal Joyce Center was transformed into a vast dining room, with table after table decorated and prepared with pre-boxed meals. Accordingly, the event partnered with an organization to deliver the leftovers to the Center for the Homeless in South Bend.

The panel discussed multiple contemporary issues in concert with the open dialogue that Dr. King began almost sixty years ago. They contemplated ideas in which the university can better diversify itself, as well as ways to learn from differences in background. They delved into the misperceptions of racism due to the confusion between institutional racism and discrimination on an individual basis.

Perhaps graduate student Cameasha Turner put it best when she described racism as “the inability to see people for who they are,” thereby challenging all those in attendance — and the campus community at large — to resist baseless prejudices and practice patience.