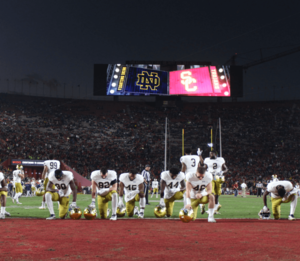 Between the final game of the regular season on Nov. 24 against USC and the College Football Playoff showdown versus Clemson on Dec. 29, Notre Dame looked ahead to its program’s future.

Amidst the holiday season and long days of preparation for the playoff came the early signing period for the 2019 recruits.

Notre Dame locked down yet another solid class, ranked 14th by 247Sports with 15 four-star recruits and six three-stars.

To nobody’s surprise, the Irish continued their trend of securing top-tier offensive linemen, headlined by Quinn Carroll and Zeke Correll.

Carroll, a 6-foot-6, 295-pound tackle from Minneapolis, told 247Sports that playing for Notre Dame is the fulfillment of a childhood dream. Despite receiving offers from other elite programs including Alabama, Georgia and Michigan, Carroll chose Notre Dame.

“With my entire family, not just my immediate family but with my aunts and uncles and grandparents, Notre Dame holds a special place in our hearts,” Carroll said.

Any questions about offensive line coach Jeff Quinn’s ability to recruit have been answered, as he has picked up right where predecessor Harry Hiestand left off. All in all, Notre Dame signed four four-star offensive linemen in the 2019 class.

The Irish also look to add talent to their defense, a large reason for their 2018 success. With the departure of key players such as junior cornerback Julian Love, senior linebacker Te’von Coney, graduate student linebacker Drue Tranquill and senior defensive tackle Jerry Tillery, the Notre Dame defense will have big shoes to fill.

The 2019 class will be a large part of that equation. Head coach Brian Kelly and his staff signed 12 defensive recruits: four defensive linemen, four linebackers and four defensive backs.

On the line, four-stars Jacob Lacey (defensive tackle) and Nana Osafo- Mensah (defensive end) look to terrorize quarterbacks as they have thus far in their football careers.

Lacey, who helped lead South Warren High School to a 15-0 record and a Kentucky state championship during his senior year, was ranked 13th among defensive tackles by 247Sports. His physicality and speed made him highly sought after, and they helped him lead his high school baseball team in steals during his freshman year.

Osafo-Mensah not only comes to Notre Dame as the most highly recruited pass-rusher in the class, but also as the undisputed winner of the best commitment video. On May 19, 2018, he posted a two-minute video to his personal Twitter account of him practicing, praying, reading and finding a Notre Dame logo at the end of the rainbow. A-plus stuff.

Perhaps the group that will need to step up the quickest, though, is the linebackers. With Tranquill and Coney gone, two of the starting linebackers next year will be inexperienced. Four-star recruits Osita Ekwonu and JD Bertrand will compete with older teammates like Drew White, Bo Bauer and Shayne Simon for playing time.

The Notre Dame secondary also has some impressive additions. Kyle Hamilton, a 6-foot-3 safety from Atlanta, was ranked fourth at his position by 247Sports. Not far behind is Litchfield Ajavon, another four-star safety. They certainly have talent and will have great senior leaders in Jalen Elliot and Alohi Gilman to help them develop.

Recruiting is always important, but it will be especially crucial over the next few years. After a 27-point loss to Clemson in the College Football Playoff, questions arose about the talent and depth on Notre Dame’s roster. While the Irish have traditionally signed four-star recruits with an occasional five-star or two, programs like Alabama, Clemson and Georgia have continued to sign more highly-touted high school players.

This 2019 class will look to silence the doubters.