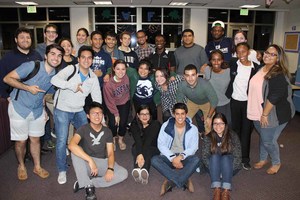 The officers of Notre Dame’s new 1stG ND club are on a mission: they want to raise awareness and provide support for Notre Dame first generation and low-socioeconomic-status (LSES) students.

“I had this idea in the back of my head, but we were both abroad in the spring. When we came back together in August, we launched a Facebook group… That was how we got people organized,” Kinga Fluder says of her experience founding the organization with her Co-President and Co- Founder Jessica Pedroza.

Though the club was just approved, Fluder, Pedroza, Vice-President Paul Kwak and the other 1stG ND officers have already planned and hosted a few events.

The club’s first two meetings centered around starting conversations with first generation and LSES students and had around 30 or 40 students in attendance.

“In both meetings, I think people really opened up because I think that’s what Notre Dame lacked: space where people could talk about these experiences that … a lot of people think they are alone in, but people see that they can relate to others who have the same struggles,” Pedroza says.

Besides the meetings, club officers, who have partnered with the Office of Student Enrichment, have plans to possibly start a Midwest conference for first generation college students (similar to the Ivy G conference run by the Ivy League schools). They also plan to host social and professional networking events, run programming for first generation freshmen and set up a peer mentorship group.

“Something that I think all three of us had a big problem with was acclimating to the environment and being somewhere where you can’t really openly talk about your family background or the fact that your parents work in jobs that are nowhere near what a lot of our peers are in,” Kinga says.

The group also talked about outreach efforts to the parents of first generation college students as well, even if they only complete an activity as simple as an FAQ in a foreign language.

The club officers intend for the club to provide a space for students to not only understand the financial and other opportunities available to them, but also to work through any feelings of guilt and to provide support.

“The hard part is really connecting back with our families back home after a year, after two,” Kinga says of one of the primary struggles a first generation college student faces. “I think people really have a hard time going back and not feeling bad about what they have accomplished.”

In addition, students need support with the college process, including everything from filling out the FAFSA to deciding on a college major.

“It seems like everyone has it sorted out where they can just fall back on their parents,” Kwak says, noting that this is an opportunity first generation college students may not have.

Financially, the hardest problems for LSES and first generation students are not tuition costs themselves, but the hidden costs that lie in everyday life, including everything from laundry to football tickets.

“There [are] a lot of things you need that you don’t have money for, and a lot of things you don’t think you need, but you want, that you don’t have money for either … You just feel ashamed going and asking for money,” Pedroza says. “Reluctant to ask our parents, because we know money is tight. Ashamed to ask the university — whether it be our rector or financial aid — because we already think we’re being given a lot and because we hesitate asking for more.”

Pedroza added, “We grow up to be independent in many respects and asking for help is difficult.”

Despite the challenges first generation and LSES students may face, the 1stG ND officers see them as a strength to the University, and they plan to use the club to promote this platform.

“We don’t always have to frame the conversation about being a deficit; we have to help empower each other and realize we’re an asset to Notre Dame and that we have certain skills and experiences and perspectives that we bring to the table,” Pedroza says.