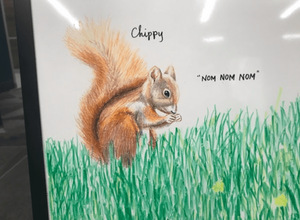 If you are among the elite patronage of students that frequents North Dining Hall, there is a chance that you’ve seen — on your way to indulge in some Voodoo Chicken or Adobo Pork or other such culinary delight — a chipmunk. His name, appropriately, is Chippy, and he lives directly beneath the daily listing of breakfast, lunch and dinner offerings on the whiteboard that overlooks the lobby of North Dining Hall. Maybe you noticed a similarly sketched deer, blue jay or cat greeting you as midterms turned to project deadlines turned to finals. Maybe you noticed the way the tree, ever-present in the background, transitioned from a snow-laden skeleton to full bloom to vibrant greenery as the weather warmed. Maybe you even dedicated yourself to reading the little historical blurbs that would so often accompany representations of D-Day, Keith Richards or Gandhi. Or maybe you’re like me and you didn’t notice any of these things until the day they disappeared.

It has been my pleasure and privilege to work here for you for the last 16 years. Today is my last day (I am transferring to the seminary) and I wish you well in your lives and all your endeavors. I leave you with my favorite quote, one that answers the age-old question,

“Am I my brother’s keeper?”

The only thing necessary for the triumph of evil is for good men to do nothing. - Edmund Burke

Signing off as your resident menu writer, artist and forever ally, Lori

Jack: There were eight kittens!

The short epitaph raised several questions: Who was this mysterious artist? What inspired her to share her art with us? And how, exactly, did Chippy come to be?

Lori Haselrick, as it turns out, is from Connecticut, though she moved around quite a bit as a child: brief stints in Missouri and Kansas preceded a four-year enrollment at the Atlanta College of Art, a decision which invited both the reservations of her family and the proposal of her now-husband of forty-one years — lest anyone deride the value of an education in the arts.

Her favorite artists include Michelangelo, for his heroic portrayal of both men and women; Frida Kahlo, for her propensity to “tell it as it is;” and Vincent van Gogh, for his singular ability to bring joy to so many people. When she’s not working in the dining hall, Haselrick enjoys tending to her black cats (she has thirteen), sipping caramel macchiatos (but only hot), and drawing (no surprise there). Though her favorite medium is acrylics, she’s grown quite fond of a good Expo marker.

It was this love for drawing that inspired her inaugural dry-erase masterpiece last spring: a portrait of three Notre Dame football players to commemorate the Blue and Gold game, completed in between the lunch and dinner rush hours when she would dutifully man the drink station. Of that first drawing and all that followed, Haselrick said, “I had no idea that anyone would even notice.” But notice they did, and once visitors started asking questions, it became increasingly clear that Haselrick had found a receptive audience for her work.

In the weeks that followed, North Dining Hall saw entire forests grow seemingly overnight: idyllic woodland scenes featuring bunnies, deer, and even Haselrick’s own cats transported viewers from a semester tinged with COVID-19 concerns, administrative screw-ups and other hard-hitting anxieties to an undisclosed Indiana backyard that — though only thirty minutes away — felt like an entirely separate world. The impact was tangible.

And so it continued, day after day, drawing after drawing, until March 31, when the Eiffel Tower first opened, “Oklahoma!” debuted on Broadway and Haselrick introduced her “This Day in History ‘’ series. Over the coming months, illustrations of the Greatest Generation and the Statue of Liberty, among others, appeared alongside the usual woodland creatures and communicated a deeply rooted love of history that Haselrick attributes to a lifetime of paying attention. “This Day in History” afforded her the perfect opportunity to teach young people all she had learned so far — from JFK to MLK to Nixon’s trip to China. Her one regret? “If I’d been around in the sixties, I probably would’ve gotten in a lot of trouble going to protests and all that.... Give me a chance to be subversive, and I’ll take it!” Haselrick said. (Exactly, some might say, as a good artist should.)

“The thing to realize,” Haselrick said, “is that life is very interesting.” One need only read her whiteboard to understand that. So varied were the topics that the casual observer might not even recognize the rather deliberate central theme (connecting the previous artworks to the monumental events of today) but each fact had only to satisfy a simple question to earn its place upon Haselrick’s beloved board: What happened today that’s a good thing?

This optimism was paramount to Haselrick’s message. “People were feeling a little stressed and sad and that’s part of why I wanted to make [the facts] uplifting and fun and change them often.... It was important to me to cheer you guys up,” Haselrick said.

If ever there was a doubt that art imitates life, one need look no further than Lori Haselrick for proof. Everything she does, from decorating the whiteboards in NDH to raising entirely too many kittens to attending art school all those years ago, she does in an unapologetic pursuit of happiness. Her final advice to the good people of North Dining Hall? Haselrick said, “Learn to be happy. And that’s up to you; it’s not up to the circumstances around you. There are things that can happen to you that make you unhappy but being a happy person is up to you.” Perhaps that’s the moral of Haselrick’s tale—maybe Michelangelo was right to portray every man and woman as heroic, maybe Van Gogh wasn’t the only artist to bring people joy and maybe happiness is the ultimate act of subversion.

There is no question that North Dining Hall is losing a momentous asset in Lori Haselrick. It seems appropriate, then, to extend to her the same parting words that she bade the Class of 2021 as their time among the student body drew to a similar close:

(Though truthfully, Haselrick, I somehow doubt you’ll need help with that last one.)