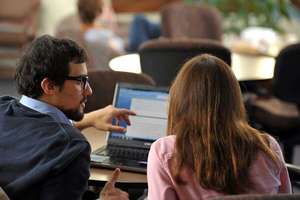 Every Tuesday, Justus Ghormley, assistant director of the Moreau College Initiative, and his team package up nine folders containing recorded lectures, articles and handouts for each of the nine classes taught at Westville Correctional Facility. On Wednesday, one of them will drop off the folders and pick up completed assignments. They then deliver the assignments to the appropriate faculty members and return to their offices for another week of work. But back at Westville, the excitement is just beginning.

“When I deliver articles from the library, it’s like Christmas,” Ghormley says. “I’m not joking.”

Ghormley said that Westville students consider education to be the key to growth and remain “unbelievably committed … [and] unbelievably engaged” even throughout this period of distanced learning.

“After class they’re still arguing about ideas and topics from class. Before class they’re talking about the readings,” he said. “If you ask a discussion question, everyone jumps in and the conversation gets more interesting the longer it goes.”

These students are part of the Moreau College Initiative (MCI), which began in 2012 as a partnership between Notre Dame, Holy Cross College and Westville to offer incarcerated men at the medium security prison the opportunity to obtain an associate’s or bachelor’s degree. Students graduate with a degree from Holy Cross, and if they are released early, they can complete their degree in person. Class offerings include courses in subjects such as political science, theology, creative writing, economics, accounting and Arabic.

In early 2017, a writing center opened at Westville to provide support to students in the MCI program. Rather than Notre Dame tutors coming to Westville, students already in the MCI program became the tutors. Emulating the University Writing Center as closely as possible, the MCI writing center requires students to be nominated and go through a rigorous application and interview process. They host and attend workshops on writing and develop teaching, leadership and professional skills. Periodically, the writing centers have joint staff meetings.

“From the start, we’re really committed to making it a two-way street and exchange of experiences so that we would not just be coming in there and saying, ‘here’s how you do it,’ Matthew Capdevielle, director of the University Writing Center, said. “It’s not strictly training for the MCI tutors any more than it is training for the Notre Dame tutors.”

While both writing centers experience many of the same struggles and triumphs, lack of technology at Westville poses an additional challenge for the tutors there. Students hand-write essays in their dorm and must wait several days before getting them printed, but during that lag time, the writers have been workshopping and editing their essays in their heads, making it difficult for tutors to provide up-to-date feedback.

Despite the challenges, Capdevielle recognizes the importance that writing centers play for everyone involved as a personalized approach to education. “Tutors very simply work to accompany the writers they’re working with on their journey as writers on a little stretch of the way,” Capdevielle said. “It can be life-changing for the students involved, and for the tutors too.”

Last fall, Capdevielle proposed a joint research project for a symposium on writing and well-being, hosted by the University of Ireland in Galway. Four students from Notre Dame and three from MCI wrote a proposal for the conference, which was accepted with the intent to present at the May 2020 conference, in person for Notre Dame students and remotely for MCI students. Another MCI tutor individually submitted a proposal which was also accepted. There are now about 10 to 15 students from each institution working on the project.

The joint research project attempts to answer questions such as: Does academic writing require you to lose your identity or self? And, what does it mean to write for yourself versus write for the academy? Contrasting the values found in these two different forms of writing, senior Ella Woods first developed the research topic in fall 2019. It focuses on the ethical relationship between academic literacy and identity, especially among groups who have previously felt or been excluded from academia, like the students at Westville.

When COVID-19 put everything on lockdown, the students put their research on hold, but they have since picked it up this fall, adapting it to fit the new restrictions. Initially, they had planned to conduct interviews; now, they exchange letters discussing topics such as students’ differing views on education and academia.

“I’m glad that the research project is going forward because a lot of the work that we’ve done through the writing center there and the partnerships between the two writing centers is kind of invisible,” Capdevielle says. “It’s visible to those of us participating in it, and we’ve been focused on the learning that’s taking place between the people who are there. But I do feel like it’s something that should be shared more broadly.”