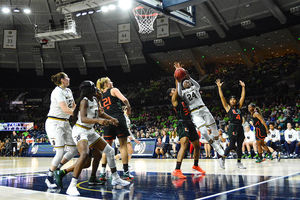 What started off as a fun scrimmage game between the men’s and women’s varsity basketball teams last week took a turn when the men’s team was unable to score a single basket. The women’s team performed spectacularly and scored an outstanding 200 points. This anomaly bamboozled spectators and sports experts alike. “Whatever. I mean, it’s not like we’re a basketball school,” Notre Dame junior and avid basketball fan Brian Briath mansplained. “And besides, women are just, like, less athletic, so the guys were obviously taking it easy on them.”

Though the women’s team has consistently outperformed the men’s team in their respective conferences in recent years, it is important to remember that women just aren’t as good at sports as men are. ESPN offered up this explanation: “The men’s team has just been working so hard, so much harder than the women’s team, so they were understandably tired and just trying to have fun. This doesn’t prove anything.”

Will these shocking results change anything? When asked if they would now be persuaded to go to a women’s game on campus, senior Jim Jimly said, “I didn’t know you could go to their games. I kinda figured they just played like in a parking lot or something. It’s cute that they try and play on the big court, though.” Whether they’ve acquired any new fans or not, one thing’s for sure: These talented women have bright futures ahead of them, whether it be in the WNBA or the home.