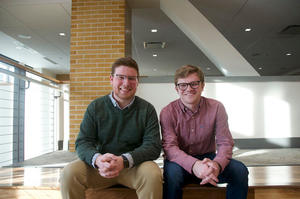 When asked where they would hide during a high-stakes, 24-hour game of hide-and-seek, junior Connor Whittle suggested the shower in the basement of Geddes Hall. His running mate, sophomore Jack Rotolo, said he would choose the far stall in the South Dining Hall bathroom.

“It smells so bad in there that no one would want to believe someone would hide there for 24 hours,” Rotolo said.

Both Whittle and Rotolo brought humor, excitement and openness to their interview with Scholastic, and they seek to bring the same qualities to their campaign and possible tenure as student body president and vice president.

Their campaign focuses on residential life, transparency and student health and well-being.

With regards to residential life, Whittle and Rotolo bring a unique wealth of experience within student government and they recognize how passionate students are about it, especially in light of the off campus exclusion policy.

An alumnus of the gateway program, Whittle has served student government as the co-director of student life, focusing on campus dining and residential life. Rotolo’s priority as Alumni Hall’s senator, like his running mate’s priority, has been residential life.

Following that, Whittle and Rotolo seek to change the role of students’ voices in the administration’s policies.

“I would much rather have it that students feel like they’re being heard through the entire process than simply a policy is being handed down and students have to raise ruckus to seek change,” Whittle said.

They have even begun to make headway in their respective roles this year.

Whittle has worked with Breyan Tornifolio, the vice president of residential life, on an improved communication strategy.

“We started with dorm renovations,” Whittle said. “A lot of students need to have a better understanding of what goes into that process, and so we created a strategy of a frequently asked questions tab which talks about what considerations go into a dorm that’s about to be renovated.”

Whittle and his co-director of student life Abby Smith then suggested “that strategy of communication and transparency needs to apply to every policy that residential life is going to be rolling out.”

Rotolo and the student senate worked on the resolution asking for documents from Associate Vice President for Residential Life Heather Rakoczy Russell to clarify where the senior exclusion policy was coming from.

The two stressed transparency, not just with regards to communication with the administration, but also as a key point for student government itself.

“We really want to move student government to a position to where it’s more of a conduit to get access to events and really be a distributor of information and events to students,” Rotolo said.

Whittle and Rotolo also seek to continue Elizabeth and Pat’s trend of biweekly “Hot Chocolate & Chat,” during which they meet with leaders from around campus and engage in genuine conversations. They cited this as an example of student government being more accessible and present in students’ lives.

Regarding student health and well-being, Whittle and Rotolo referenced an incident at the beginning of the school year as an example of the university’s need for improvement.

Instead, Whittle and Rotolo proposed that resources like McWell and the UCC expand their partnerships around the university with the bookstore and more frequented locations.

Rotolo cited dorm health and wellness commissioners as capable of bringing the McWell and UCC “to the students” to both make help more accessible and allow the staff to better understand what students are going through.

The two also highlighted the need to promote multicultural commissioners to improve diversity and inclusion. Whittle recognized the lack of diversity among resident assistants and proposed greater promotion to students early in their college career.

Through all of Whittle and Rotolo’s proposed ideas lies the underlying hope for improved community through dorm life.

“I nearly transferred from this university. For one reason or another, I didn’t find this place home,” Whittle said. “Anything that we can do as student leaders to make students feel belonging, we’re gonna do it.