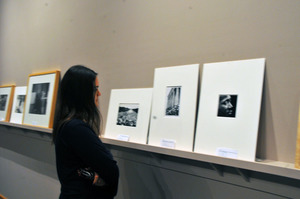 As part of Walk the Walk Week, the Snite Museum of Art displayed 17 photographs on Monday, Jan. 23 in a special civil rights exhibition. The collection included iconic photographs from the period including images of Dr. Martin Luther King Jr.’s arrest in Montgomery, police dogs attacking peaceful demonstrators, the March on Washington and a lunch sit-in in Oklahoma City.

Bridget Hoyt, the curator of education for academic programs, said before the even that she thought the photograph of Dr. King after his “I Have a Dream” speech would be the crowd favorite.

“It’s such a well-known image; I think people are really drawn to it,” she said.

Though the photographs provided an important function during Walk the Walk Week, their significance extends past the single week in January.

“I think [the collection] provides some context to conversations that are currently happening on campus,” Hoyt said. “In some ways, it documents a specific historical movement and time period, but we’re still involved in the struggle.”

Given their importance, the museum will continue to acquire such works in the future.

“We’ve been growing the collection because it is such an important legacy that we like to talk about on campus, and it reflects issues that are still going on today,” Hoyt said.

Though the exhibit for Walk the Walk Week has ended, Hoyt said students can make requests to see the photographs at other times. “The collection of the museum as a whole is such a rich resource, and we want to make things as accessible as possible to students.”