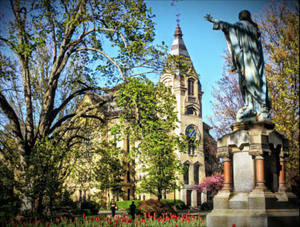 With Campus Crossroads underway and the core curriculum under review, Notre Dame is changing both physically and academically. The future of the university is being considered and determined, and both students and staff want their voices to be heard.

The regularity of these meetings and the number of meetings offered to staff raise the question of whether this same information is as easily available to students.

As would be expected, there are many issues discussed at staff town hall meetings that are pertinent only to staff. There are also points on which staff and student interests converge, however. McQuade says topics discussed in the Q&A session included security, pay and benefits, parking, construction, the Blue-Gold game and Greenfields closing.

"We try -- very hard -- to be as open as we can with information to staff, and that's why we hold an open question session, so we can try to understand what [an employee's] issue is or what they want to know about … I think, to a great degree, for us, we try to err as much as we can on transparency because both my boss [John Affleck-Graves] and I, and Father John, think that employees should have an understanding of why and what we're doing," says McQuade.

Some wonder: are students entitled to this same understanding? Since the town hall meetings are geared toward staff and their issues as employees, students are not encouraged to attend, says McQuade. They want to keep the focus on employee issues, and McQuade says he would not have many answers to student questions. If students are interested, video recordings of the meetings are available online and the information is printed in NDWorks, which includes news for Notre Dame faculty, staff and their families.

There have been undergraduate town hall meetings as well. The most recent, on Feb. 16, featured Jenkins, Affleck-Graves and University Provost Tom Burish. It covered topics such as Campus Crossroads, Commencement, diversity and inclusion, the Keough School of Global Affairs and the core curriculum review.

In addition, Vidal notes that lack of student interest and limited attendance has hindered the goal of regular town hall meetings.

"I think it would be great to have regular town hall meetings, but you have to understand that it's been very difficult to get students to show up in the past," says Vidal. "Our administrators are more than willing to do this, but we have to show up ... It's a matter of setting a tone, so that [town hall meetings] stays regular."

This year the town hall meeting was significantly more successful than in previous years. Student government tried different ways of promoting the event, and Vidal estimates well over a hundred students were in attendance, a marked increase from previous years.

"I think town hall meetings should be an opportunity to hear the information come straight from the source," Vidal says. "It's a chance to directly ask questions and to be in the conversation, and I think it should serve as a foundation for student questions, so you can go learn about what's happening, and if you have follow-up questions, you can either ask them there or you can come back to us and say, ‘This is what I heard, and this is my input.' And then we can provide that input to the administration."

The information is out there, and student government tries to communicate as often as possible. They send direct emails to students, and each week, student government spark notes appear in The Observer, outlining a few current issues and inviting students to email student government with any questions, comments, concerns or feedback of any sort.

"The few times we've gotten emails [in response to The Observer spark notes], I've brought people directly to the office. I've drafted something, and we've taken it to the Main Building," Vidal says.

Vidal notes that many people are disconnected from this process and a lot of student representative bodies are underutilized, like the Senate, which is designed to disseminate information to residence halls.

As a student, Vidal says she understands getting wrapped up in the day-to-day business of being a college student and prioritizing studying for a test or working on a group project over really engaging with the issues. She wants students to know the information is available if students are willing to seek it out.

Additionally, Vidal emphasizes that the primary job of student government is to make sure student input is heard.

"We are supposed to be an arm of representation. We're supposed to be the students' voice. So, we have some students come in and give opinions or send us an email, and I always ensure that email or that comment is brought to administration, always. That's my job. That's the job of my team here … and everything that we've brought to administrators has been addressed in some form or another. They always respond to emails. They stayed an hour after the town hall to answer all the questions. There's just a disconnect."

If you would like to reach out to student government you can contact them at studegov@nd.edu. Senate meetings are held Wednesdays at 6 p.m. in the Notre Dame Room of LaFortune. All meetings are open to the public.