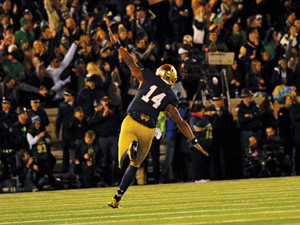 Prior to Notre Dame’s Fiesta Bowl matchup with Ohio State, there was a lot of talk about the connection between the two teams. The schools boast two of the top-five programs in college football history in wins, and Ohio State’s head coach Urban Meyer was a wide receivers coach at Notre Dame from 1996-2000.

But one of the largely overlooked connections involves the programs’ unique quarterback situations in recent years. After Ohio State’s preseason third-stringer Cardale Jones went on to lead the Buckeyes to a national championship last season, the team was faced with quite the QB controversy as all three quarterbacks returned for the 2015 season.

Notre Dame won’t have quite the same controversy on its hands as the 2016 season approaches, but like Ohio State, it will have an abundance of talented quarterback options in DeShone Kizer, Malik Zaire, Brandon Wimbush and incoming freshman Ian Book out of California. Heading into the upcoming season, Zaire will have two years of eligibility remaining, and Kizer and Wimbush have three a piece.

Malik Zaire’s solid performance in the Music City Bowl against LSU, along with Everett Golson’s transfer, helped earn him the starting quarterback spot when the Irish opened the season against Texas. But after Zaire suffered a season-ending ankle injury midway through the second game against Virginia, redshirt freshman DeShone Kizer led the team to a dramatic victory and quarterbacked the Irish the remainder of the season.

Unless there is a major shakeup in the quarterback situation, it appears that Kizer and Zaire will battle it out for the starting quarterback spot next season. Zaire has played well in limited action, posting a 155.8 quarterback rating in the Music City Bowl and throwing three touchdowns in the team’s 38-3 opening game victory over Texas. He struggled somewhat, however, against Virginia before leaving the game due to injury.

Stepping in for Zaire, Kizer completed 63 percent of his passes for 2,884 yards and 21 touchdowns and added 520 rushing yards with 10 rushing touchdowns. He led the Irish to a 10-2 season in which the team was on the brink of a spot in the College Football Playoff. With a solid performance and Fiesta Bowl victory over Ohio State, it would have been difficult to imagine Kizer not being the starter when the Irish take on Texas to open next season.

The Irish lost 44-28 to the Buckeyes, however. And although Kizer played fairly well, throwing for two touchdowns and adding a rushing score, Irish fans should expect a quarterback competition heading into next season.

“You don’t have to concern yourself with the unknown with [Kizer and Zaire]. You have some game background to make a good decision,” Sanford said. “Then really it comes down to the purity of competition and statistically analyzing everything they do.”

Kizer gave his thoughts as well.

“You can’t predict what is going to happen there. It’s going to be wild,” Kizer said. “You have a really good quarterback who goes down and comes back ready to go [in Zaire]. You have a freshman [in Brandon Wimbush] who’s more developed than any freshman in the country, probably. I can’t tell you what’s going to happen.”

Head coach Brian Kelly hasn’t indicated which quarterback will start next season, but he feels confident in the team moving forward despite the Fiesta Bowl defeat.

“We keep banging on the door,” Kelly said. “We’ll keep playing the Ohio States and the Florida States and the Alabamas — the big names and the great traditions. We’ll get back here and we’ll win this thing. You keep recruiting, keep working and stay the course.”

“[The receivers] are a tough group now,” Kelly said. “You look at them on the sideline and they got an edge about them. It’s pretty good.”  With a deep receiving corps and a solid quarterback battle to last the offseason, it’s a good bet that Notre Dame’s aerial attack will be dangerous in 2016.