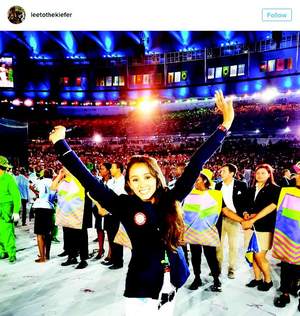 OLYMPICS ON INSTAGRAM Kiefer used social media to document her road to Rio.

Of the twelve current or former Fighting Irish student-athletes who competed in the 2016 Summer Olympics, only one will return as a student this fall: Lee Kiefer.

Fencing runs in the family for the Kiefers. Lee’s father was a fencing captain at Duke, her older sister Alex fenced at Harvard and her younger brother Axel is a sophomore fencer at Notre Dame.

“When I was seven, [my father] introduced the sport to my sister and me,” Kiefer says. “He taught us basic footwork and then would drive us to Louisville every week to train at Louisville Fencing Club. I love fencing because even after fifteen years, it is possible to learn new things and be creative.”

For Kiefer, a 22-year old senior science preprofessional major from Lexington, KY, the 2016 Games marked her second Olympic experience; she competed in individual foil for the USA women’s fencing team in 2012.

Entering the Rio Olympics, Kiefer had already accomplished plenty. Along with a 5th place finish in London, she was a three-time NCAA foil champion and earned first-team All-American honors in three consecutive seasons. In 2011, she became the second U.S. women’s foil fencer to earn a medal at the Senior World Championships, taking home the bronze. In 2015, she became the first athlete to win seven consecutive individual titles at the Pan American Championships.

After finishing her junior year at Notre Dame in 2015, Kiefer decided to take a year off from school to focus on training. She entered Rio ranked No. 1 in women’s individual foil among U.S. fencers and third in the world.

After winning her opening match, Kiefer fell in the round of 16 to Yongshi Liu of China. Kiefer was disappointed by the outcome.

“During the competition, I feel like I did not compete my best. I was not focused in the moment, but my opponent was very prepared and took advantage of my fast paced fencing,” she says. “I was upset that I lost because I knew that if I had taken the time to slow down, I could have come back from the deficit. My family and friends came to watch me, so I wish that I had competed my best for them.”

“It is hard when your whole career amounts to one day,” Kiefer adds. “I have had the best season of my life and have medaled at multiple world cups, so I am still proud of myself, and I still love fencing.” In the end, Kiefer enjoyed her Olympic experience.

“I was very honored to represent my country and Notre Dame at the past two Olympics. As an Olympian, I feel the responsibility to inspire others to work hard. I also feel privileged for having the ability to travel around the world and grateful for all of the people who helped me get there.”

Kiefer is back at Notre Dame taking classes and will compete again for the Irish fencing team. And after graduation?

“My plan is to go to medical school,” she says. “Before the Olympics, I was positive that I would retire from fencing after my senior year. During the first week in Rio, I met a diver who is currently in medical school, which shows that it is possible to do both. I have not made any definitive plans, but I will probably have to decide soon.”

Kiefer thanks all the friends and family who have supported her throughout the process, including her training partner, fellow ND fencer Sabrina Massialas, and her boyfriend Gerek Meinhardt, Notre Dame undergraduate class of 2013 and MBA class of 2015, who won a bronze medal for the U.S. in men’s team foil.