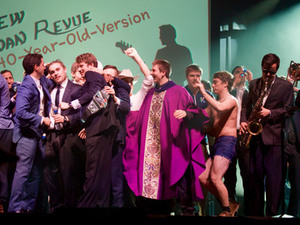 The university’s dorm system and the residential communities that result from it are featured prominently in countless Notre Dame recruiting and promotional materials: the tours given by Admissions; anecdotes from current and former students; the awards given out to best women’s, men’s and overall halls every year. Yet for all of the pride taken by these individual communities in rituals and traditions, one event transcends the rest in terms of anticipation, popularity and excitement. That event is the Keenan Revue.

Now running 40 years strong, the Revue celebrated its most recent edition in sold-out performances on Feb. 11, 12 and 13. And for all of the news and commentary about its history — with anniversaries always a year behind those of “Saturday Night Live” — the way its participants and leaders best celebrated this notable achievement was by bringing it back to where it all started: the Keenan Hall community.

Seamus Ronan, a head writer and senior, says he and producer Ryan Rizzuto realized during their sophomore year that they would be able to plan the anniversary celebration. They immediately began thinking about the best possible way to commemorate the work of those who had come before them and the unique spectacle that the Revue manages to produce every year.

By bringing back various skits, designs and images, the show managed to tie all 40 editions together with a contemporary twist, focusing on the same topics that it always has with the binding tie, as always, being the Keenan Knights brotherhood.

The theme this year was the anniversary, making itself known prominently in the title of the 2016 show: the “Keenan Revue: The 40 Year Old Version.” Bringing alumni back to see this compilation was always a major goal — one that Ronan believes they firmly achieved. The original producer, director and rector were all able to come back over the weekend, as were 25 to 30 additional alumni for the Saturday show alone.

The continuity that united them all, as alumni of this hall and of the show specifically, was fully on display. Ronan estimates that every year, at least 120 to 130 members — approximately half the hall — participate in the show.

As Rev. Rich Conyers, C.S.C., under whom the Revue first started, said in a speech at the Saturday show, the Revue began as an alternative to drinking: another way to promote the community-centered living that has long been a center of Notre Dame campus life.

And Ronan says that that is still the case for many of the show’s leaders today. “Myself included, there’s a bunch of us who don’t really go out, who kind of stay in — late nights — just working hard together on the show,” he says. “And we all dedicate ourselves to this basically one to two week stretch in February to just kind of put work aside and put socializing and going out aside, and just focus on putting together the best damn show that we can.”

And that show includes something for everyone. With sketches as well as dancing and live music, the annual Revue

The chance for Notre Dame students to take a break from their daily lives and look at things in a different light has created an almost mythical excitement surrounding this event every year: a show that truly is produced as a labor of love by all involved.

After closely knowing and sharing memories with members of Keenan up to three classes older than him as well as those three years younger — not to mention his own classmates — through this Revue, Ronan has been able to look back at the importance of what this event and place has meant to him.

“I think … mostly everyone in Keenan, when reflecting back on their time at Notre Dame, they’ll say that their favorite memory was the Revue,” he says. “It was about living in community and working together towards a communal goal, and the Revue does that every single year.”