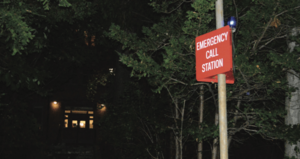 As summer ended, campus administration announced a new Irish1Card policy which allows only “essential staff” and members of a specific dorm to gain entrance to individual residence halls, replacing the old policy, which granted students access to all residence halls during select hours.

An online group called “We Deserve Better” circulated a petition to students denouncing the “attempts by out-of-touch administrators to undermine campus life.”

Pushback against the policy was also echoed by off-campus students. “It is very unbecoming for an administration which prides itself not only on its excellence, but also its Catholic character, to approve policy which negatively affects the heart and soul of Notre Dame ... without proper consultation and weighing of the consequences,” said Katie O’Sullivan, president of off-campus council.

The policy was officially announced on Aug. 19 by Associate Vice President for Residential Life Heather Rakoczy Russell and Notre Dame Police Department Chief Keri Kei Shibata. According to Rakoczy Russell, this policy is the final step in a yearslong process, outlined in the results of an Administrative Unit Review (AUR) conducted during the 2012-2013 academic year.

“It’s not as simple as statistics saying ‘x, y and z’ and then we do that,” Rakoczy Russell explained, commenting on the process of deciding on a new policy. “It’s more a trend from the AUR, a trend from benchmarking, a trend from the national best practices, consulting with local authorities and then a recommendation to the university.”

One group, however, was noticeably absent from discussion on the policy: student government.

Rakoczy Russell still plans to open discourse with students moving forward, as does student government, who voiced that they “certainly have reservations about the policy and some of the unintended consequences that may come from it.”

One such consequence is the negative impact this policy has on those with disabilities and mobility limitations. Monica Mesecar, president of Access-ABLE, a club that advocates for students with disabilities on campus, expressed concerns about accessibility.

“As a physically disabled student who uses a wheelchair ... [my friends] used to be able to let themselves in and find their way to me, but now, I have to physically let them in,” Mesecar said.

The policy change also raised questions about the university’s lack of blue lights. Shibata explained, however, that blue lights are less effective than people think.

“Practically speaking, they almost never get used,” she said. “Everyone has a cellphone, and there are almost always people around who could help if someone needs help. It’s partly a cost thing, partly an aesthetics thing.”

SafebouND, NDPD’s safety-escort service, partly alleviates this issue. Though the NDPD website advertises that the service has limited hours, Shibata assured that the service operates full-time. Students who call upon the service will be aided without question and do not need to fear repercussions for underage drinking.

Another student concern regards the limited availability of emergency shelter. If students feel unsafe walking after dark, encounter an active shooter or face extreme weather, they may not be able to access the closest

Rakoczy Russell is adamant that the policy does not cause drastic change. “Many students oddly had the impression that what the actual access policy was [previously] was that all students had all-access to all halls and all doors at all times — which it never was,” she said.

When asked what students should do if they feel unsafe, Rakoczy Russell explained that every student’s day-to-day experience is highly individualized.

“You know where you will be every day of the week. Do some planning around where you are going to be and what buildings you will have access to and what makes the most sense for you,” Rakoczy Russell entreated, wanting students research and know building hours. “I know that’s not as convenient as having more access to more buildings, but it was a misnomer that everyone had access at all times.”

In this vein, the university encourages students to familiarize themselves with building hours. Few buildings on the campus directory are open past 9 p.m., preventing shelter during later hours, when students are more likely to encounter situations that make them feel unsafe. Moreover, building hours are not easily found, hindering the administration’s suggested solution.

Still, the administration presented the policy’s biggest drawback as inconvenience. “We want to create the right culture of being prepared and knowing what your resources are. Once that becomes the regular way of operating, then [students] won’t have to think about it as much,” Shibata explained.

Though students may see the policy as inconvenient, the administration argues that the policy encourages “relational encounters” by forcing students to arrange for entrance into each other’s dorms and ensures the overall safety of the community.

“Going forward ... [Student Government] will be working closely with administrators to continue representing student interests and working towards solutions that best serve the student body,” Student Body Vice President Patrick McGuire. It remains to be seen whether changes will be made to the policy.