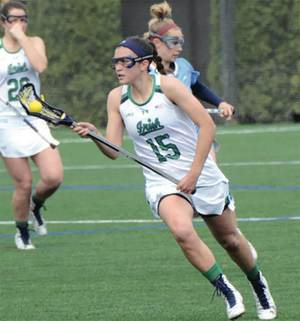 The WomensLax.com’s National Rookie of the Year in 2014. A two- time Tewaarton award nominee in 2015 and 2016. A two-time IWLCA first team selection in 2015 and 2016. A member of Team USA. Notre Dame’s career leader in points. It has been quite the career for Cortney Fortunato, and it isn’t quite over.

The attacking midfielder from Northport, New York has 52 points through 13 games in her senior season and has led the Irish to a 9-4 record through one of the most difficult schedules in women’s Division I lacrosse.

As Fortunato’s time winds down in South Bend, she has had time to reflect on her storied career on and off the turf of Arlotta Stadium.
In the fall of 2013, Fortunato came to Notre Dame as one of the top recruits in the nation. Incredibly, she has managed to exceed the high expectations that preceded her four years ago.

“I think my experiences in high school prepared me well for the pressure I would experience in college,” says Fortunato. “I have had pressure on me from a pretty young age to perform at a high level, so even though competing in college is at much higher level of play than high school, I still understood what that pressure would feel like and how to not only play through it but embrace it.”

And she has embraced it. Fortunato has led the Irish in points every year since her inaugural season in the spring of 2014. While she came to Notre Dame as a top recruit from New York, she had the option to attend any of the traditional powerhouses on the East Coast. So, why did she choose Notre Dame?

“Notre Dame was the first school I visited and it was hard to compare any school to it once I came here,” says Fortunato. “There is just something about Notre Dame that is so special. I also wanted to be part of a program that would compete for a national championship for the first time.”

Though Fortunato has excelled on the field, she has benefitted from her time off it as well, particularly in the classroom.

“My favorite class has been my senior research capstone for my education, schooling and society minor,” says Fortunato. “I chose to study how food insecurity affects the lives of South Bend students and how this specifically influences their educational experience. It was really cool to be able to go into schools in the community and talk to principals about this issue and how to make a change.”

In the summer after her junior year, the psychology major studied in Ireland through Notre Dame’s Ireland Inside Track Program. After the week of class, she traveled to Prague with some friends.

“It was an amazing experience that I am very fortunate for and will never forget,” says Fortunato.

Fortunato has also had the opportunity to represent her country through lacrosse. She played for the Team USA U19 team that won gold at the 2011 Federation of International Lacrosse U19 World Championships in Hannover, Germany. She led the Team USA in goals and points while also being its youngest member. She was selected to the all-world team for her performance.

This past January, Fortunato competed at the Team USA Spring Premiere for the chance to represent the United States at the 2017 Federation of International Lacrosse Women’s World Cup. During the training session, she and Team USA faced off against none other than Notre Dame in an exhibition match. Team USA won the game 22-5.

“Playing for Team USA has helped me develop into a more well-rounded player,” says Fortunato. “Just with the sheer exposure of playing with such elite level athletes and lacrosse players has pushed me to improve my personal game by learning a lot from those teammates.”

At the moment, Fortunato is using her experience with Team USA to lead Notre Dame in her final season. After dropping three straight games over spring break, Fortunato and the Irish rebounded with a 16-7 thrashing of the Syracuse Orange in the Carrier Dome.

“I think those losses really made us step back and evaluate who we were going to be moving forward as a team and motivate us to work hard everyday in practice to get better,” says Fortunato. “I think it’s good to get a taste of defeat before moving into the postseason.”

The Irish have three regular season games to play before the ACC Tournament in Richmond. The NCAA tournament awaits after ACCs. Last season, Fortunato helped lead the Irish to its first quarterfinal appearance in NCAAs since 2009. The senior captain cites “collective mental strength and stamina” as the two most important assets the Irish must have to make a deeper run this spring.

No matter the outcome in May, Fortunato will leave a lasting legacy when she departs South Bend. From her performance on the field to her dedication off it, she has set an example for all athletes who represent Notre Dame.

“I want to be remembered not only as a great athlete,” she says, “but as a great teammate and a hard worker, both on the field and the in the classroom.”