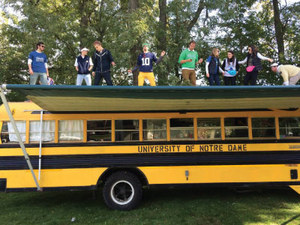 This past football season, the Bus became a recognizable name to students all over campus. Owned entirely by Notre Dame seniors, the Bus was a mainstay at home football games as well as at other locations, such as Purdue for an away weekend and even Notre Dame soccer games. Each week Facebook invites are sent and tailgaters commune around the far edges of campus to snap epic pictures on top of the bus roof, being careful not to slip on the ice. This year is only the second year the Bus has been in commission, and now that the football season is over, the reins will be passed over to the next generation of tailgating seniors. Juniors Ben Harvel and Charlie Cardon are likely future bus owners and are looking forward to making this upcoming football season even better than before. 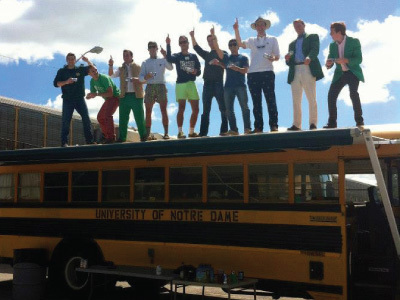 Q: What made you want to buy the Bus this year?

Cardon: I haven’t 100% committed yet, but normally people in O’Neill spend most of their free time with their section mates, so the Bus kind of breaks that down and brings other O’Neill guys together that don’t normally see one another.

Harvel: I was first interested just by the tailgating experience in general. I’ve been to other tailgates at other schools near where I’m from, but Notre Dame’s game day is one of a kind. I think the atmosphere is epitomized by the Bus, and it offers a kind of landmark that is easy to spot.

Q: Did you attend any of the tailgates this year?

Cardon: Yes, I traveled to Purdue, and I went to one other.

Harvel: I stopped by for a couple of them and had a great time. 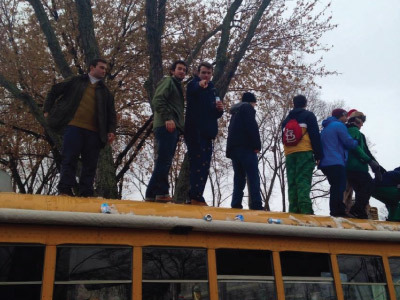 Q: Do you plan on doing anything different or unique with the Bus this year?

Cardon: Rumor is we’re going to install a jacuzzi for Father Hesburgh and his posse.

Harvel: We haven’t talked about it all that much, but I am sure there will be plenty of unique additions for next year.

Q: Do you know if any other schools that have something like this at their student tailgates?

Cardon: I heard Michigan has a tailgating Prius, so our Bus is obviously better.

Harvel: I think the Bus is in a league of its own because it’s owned exclusively by Notre Dame students. Other tailgates I’ve been to have either been out of fraternity houses or out of the trunk of someone’s car, but the Bus is a fun and recognizable venue.

Q: What’s the best story you’ve heard about the Bus so far?

Harvel: I think the coolest thing I’ve seen is the awesome photo of the seniors this year standing on top of the Bus at the Purdue game. It was probably a little dangerous but I think it really shows how much fun people have on game days.

Q: Are you going to use the Bus for other sporting events as well?

Harvel: I’d really like to bring the Bus to as many sporting events as possible. We have so many incredible athletic programs here, and it would be great if we could rally more support for the men and women that put so much work into their sport.

Cardon: Hopefully we can. This past year O’Neill was a big supporter of the men’s and women’s soccer teams, so next year we’ll try to make it to more games and bring a rowdy crowd.