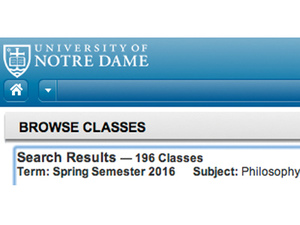 This course will explore the essential questions regarding the classic Notre Dame introduction: Is it still a suburb of Chicago if it’s in Iowa? If you’re from Morrissey, should you leave that out of your introduction altogether? As a finance major, should you even bother pretending to care enough to ask any questions about the other person? The class is mostly discussion based, with a final paper analyzing the ethics of passing judgment on someone who tells you the age he or she was first dressed in Notre Dame apparel.

Prerequisites: Have too many friends on social media, read one article on Politico

In this class, we will investigate the failures and successes of the 2016 Republican and Democratic debates. Students of all majors are encouraged to enroll, particularly those who are not studying Political Science. It’s strongly suggested that prior to the course, students share no less than three statuses about the debates on social media without any sources and especially without consistent punctuation.

Because we simply haven’t discussed it enough, come join in the debate about the current Campus Crossroads project here at Notre Dame.  Tell your peers all about the early morning construction that’s woken you up the last four mornings, and don’t forget to let them know that your parents aren’t paying $60,000 a year to have your beauty sleep interrupted so aggressively! Or, on the other hand, argue that $400 million really isn’t that much of an investment (just slightly more than the GDP of Micronesia anyway), and while you’re at it, show your classmates the patch of grass you purchased from the Notre Dame Stadium for a steal of a deal. The class is held in the Coleman-Morse Center, with premium seating available for higher-paying members of the Notre Dame family, though we swear we care about large donors no more than the rest.

THEO 30270 – From Darkness to Light: Saving Your Non-Catholic Peers

Know a Methodist? An agnostic? A Jew? This class is perfect for you. For when two theology classes and a crucifix in every classroom isn’t enough, learn how to best go about converting your less civilized peers, bringing them closer to the light and love of Jesus one uncomfortable pressuring invitation to mass at a time.

It truly was Texans that Jesus was talking about when he said, “Blessed are the meek.” They’re known for their reticence, especially concerning where they were born, but in this course we will study the Lone Star habits we pray will change. Texans are morally obligated to tell people they’re from Texas, as harboring the information concerning their God-given, secession-ready, gun-filled state is a mortal sin. We all know what it’s like to daydream in class, wishing we could hear someone exclaim an unwarranted fact about moderately warm summers or see an Odyssey Online article shared in our Facebook newsfeed concerning the blessing that is pick-up trucks. In this class, we’ll ask the big questions, because, as you might not have heard, everything’s bigger in Texas.

Learn how to really make the most of your dorm mass!  We’ll investigate the (true) claim that believers always stand up before everyone else at mass, as the Spirit moves them at rates faster than lukewarm “Catholics,” who didn’t even give up Facebook for Lent last year. You’ll learn how to be attentive to who bows the lowest during transubstantiation, and we will practice flexibility in getting our noses to really graze the floor on the way down. Finally, despite your level of choral experience, you’ll leave this class dedicated to singing at mass so everyone in your hall knows how seriously committed you are to enhancing their spiritual experience. Like St. Francis said, “Preach the Gospel at all times; when necessary, tell everyone nearby at LaFun that you went to Mass.”

THEO 20120 – The Lord at Liam’s: Finding Christ at the Student Health Center

If you can’t handle St. Liam’s at its worst, you don’t deserve it at its best. Cultivate the virtues of humility, patience and temperance as you sit in the waiting room wishing the student next to you would just cover his mouth when he coughs because it’s really not that hard and you’ve been doing that since you were like six. Jesus died for your sins, and He certainly wouldn’t have complained if the nurse simply gave Him a few saltine crackers when He sprained his ankle.  Examine Christ in yourself and the actors on the daytime soap operas that play in the lobby, and remember that Jesus’ love is all the healing we really need anyway.