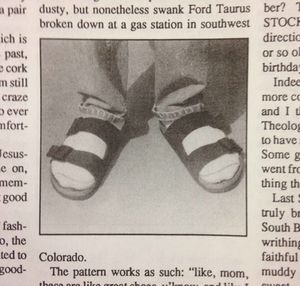 In the Sept. 12, 1991 issue of Scholastic, Nate FitzGerald wrote a humorous piece on the then-latest Notre Dame fashion trend: Birkenstocks. Calling it the final step to the “hippie chic” look, FitzGerald wrote that although he considered the shoes ugly, they were “soooo comfortable.” He did cite the price tag as a con of getting the popular shoe, though, noting that the top model, the Arizona, sold for a whopping $75. (For those of you less inclined to keep up with Birkenstock shoe prices, the Arizona currently sells for $125. It turns out we are actually getting the better deal nowadays, though, as an inflation calculator revealed, $75 in 1991 is worth about $132 today. What a steal.) Still, FitzGerald called the students who could afford Birkenstocks “TFHs”, or “Trust Fund Hippies,” for their ability to rely on their parents’ AMEX cards for the pricey shoe.

Despite his complaints and laments for the days of the $0.69 drugstore flip flop, FitzGerald admitted to owning a pair himself, a 21st birthday present from his parents. Having broken them in, he was enjoying those shoes that he agreed were “soooo comfortable.”

One thing has not changed — the again-popular Birkenstock is The Look. The picture accompanying the article shows the aforementioned Birkenstock Arizona, which looks exactly the same as the Birkenstocks many Notre Dame students sport today. Who knows how long the Birkenstock trend will continue to last? It will undoubtedly come back again for another episode of #tbt.