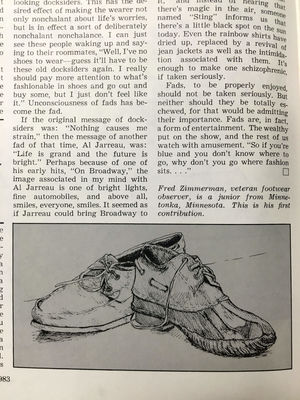 In the October 1983 issue of Scholastic, Fred Zimmerman, “veteran footwear observer,” wrote about what went through his head the first time he saw “Duck Shoes.”

The first time Zimmerman saw them, he described himself as “shocked, befuddled, perhaps even a bit traumatized.” Duck shoes still wreak havoc on this campus, and their popularity doesn’t seem to be waning. They still make appearances even when rain hasn’t been seen in weeks, they still mimic the quacks of ducks when they “squeak across the tile floors,” wet from autumn slush. Many of us still have the desire to “tell the whole flock of them to go jump in a lake.”

Despite the title, however, Zimmerman departed from his abhorrence for duck shoes two paragraphs in, switching his focus to docksiders (what we now call boat shoes), the stigma they carry and how he despised them even more than the former.

Zimmerman described the ownership of docksiders as “membership in an elite club,” with the motto, “Nothing causes me strain.” Once again, Zimmerman showed his inner shoe psychologist. I myself own a pair of docksiders, and when I slip on those poorly insulated shoes with outsoles that mimic the webbed foot of a duck, “the world [becomes] my playground, and life is a cinch,” as Zimmerman wrote.

Zimmerman recognized that, although docksiders adorn the feet of those who are at the pinnacle of the social pyramid, they carry a negative connotation — wealth. He pointed out that trend is to wear “exceedingly old and scruffy looking docksiders” because, as he put it, the wearer wants to exude a “nonchalant nonchalance.”

Zimmerman is a genius. I don’t know him. I don’t know anyone who knows him. I pray he’s still observing shoes and enlightening our ignorant world.