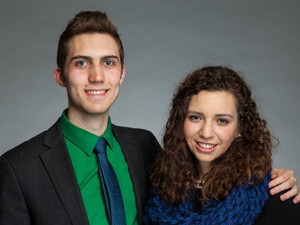 Student Body President Bryan Ricketts and Vice President Nidia Ruelas knocked on every single dorm room door while campaigning for election last semester, receiving first-hand knowledge of the most important issues in the eyes of members of the student body.

As current leaders of student government, the two now do not have the same flexibility to perform this ritual again. In continuing with a campaign platform promise, however, they have now come up with what they believe to be a suitable equivalent: an online platform called “Onward.”

As Chief of Staff Dan Sehlhorst likes to think of it, it is a “more democratic mechanism for gathering ideas”; in Ricketts’ words, “an online ideation space for students to come if they’ve got ideas, if they’ve got questions, and post them to start discussions.”

In a problem-solution model format, Onward is a forum accessible to all current Notre Dame students, and serves as a place where students can identify issues that they see on campus, as well as potential solutions. Other students can then “up-vote” or “down-vote” these same posts, and comment on them in order to start a discussion on the issues themselves or other potential solutions. Ultimately, once posts have become popular enough, they are filtered into an “implementation pipeline,” as these same ideas and solutions and the students that prompted them are connected with the appropriate administrators and services across campus.

This is done through a team of moderators and stewards, respectively. The moderators are members of student government’s Constituent Services team – they keep conversation civil, adhering to a handbook developed over the summer, and help to shepherd certain ideas through this pipeline, after identifying them based on popularity. The stewards, as Sehlhorst says, are faculty and staff from “basically every major area of campus where students are engaged directly.” Whenever a student has an idea for a solution, the idea is that the student will be consulting with whichever person on campus works directly on that issue.

“The whole idea is to have this platform where students can express those ideas in a productive and efficient way,” Ruelas says. The main difference between this effort and various social media systems that have a similar model is that students will not be able to provide these inputs anonymously.

Although Ruelas says there was much discussion on this specific component of the system, they ultimately decided that, once it was clear that anonymity would not be possible given the platform of the system, this accountability was a key aspect of the student development side of things.

“It goes back to the very fundamental idea that we’re a campus community: we’re here to support each other and help each other grow,” Ruelas says.

The leaders of student government have been working to develop this system with the Office of Information Technology before they were even physically in office – all the way back in March.

As the system rolls out and students become more active in participating, its creators are ready to respond to issues as they become apparent, and identify where strengths and opportunities for growth are, according to Ricketts.

Ultimately, the heads of student government would like to combat a certain perception. Sehlhorst calls it the “distance from the dome,” or the idea that administrators don’t care or know about students’ problems. As Ricketts says, this platform gives them a way to “show people this work that has always been happening, but it sort of pulls back the curtain a little bit.”

Through dialogue amongst students and application of these ideas and solutions in administrative policies and actions, they hope this will all come together, as the student body president says, “into a cohesive picture of how we’re moving Notre Dame forward.”