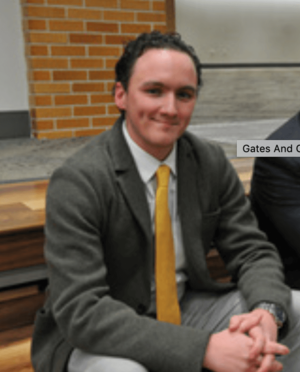 For the first time, the event was open to the student body as a whole, rather than just the student senate. Student Body Vice President Corey Gayheart introduced McGavick prior to the address.

One of the administration’s primary goals was to make student government approachable, accessible and transparent. Among boosting social media posts and live-streaming senate meetings, the administration held regular office hours and met new people every week by dining with a random group of students.

Regarding his weekly lunch meetings, McGavick said: “It quickly became our favorite part of the week. We feel it’s important that student government is connected to more of its students.”

McGavick’s second goal for his administration was greater collaboration, especially with University administration, campus dining, student groups and campus safety. As part of this collaboration, dining hall chefs designed new menus based off of the results from a food survey.

“Consider the famous picture of Father Hesburgh, held arm-in-arm with the great Dr. Martin Luther King, Jr. Father Hesburgh pulled Notre Dame on the right side of history,” McGavick said. This image has inspired McGavick’s mission. “We must make every effort to face decisions with Father Hesburgh’s poise.”

Their third goal — to implement transformative policies — stems from the desire to encourage diversity and student well-being. Working with McGavick’s administration, the senate passed a resolution acknowledging that Notre Dame was built on Potawatomi land, recommended that professors include mental health resources on their syllabi and developed a sustainability policy to create energy from food waste.

McGavick closed his address by ackowledging next year’s student body president and vice president, Elizabeth Boyle and Patrick McGuire. He said: “If you don’t know Elizabeth and Pat, know this: they’re compassionate, hardworking and deeply devoted to the well-being of this community.”