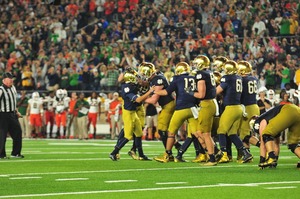 Oct. 29 saw the addition of another thrilling chapter to one of the most storied rivalries in college football. The 25th meeting between the Notre Dame Fighting Irish and the Miami Hurricanes was filled with many twists and turns, though it ultimately finished with one of the best — if only — Irish victories from the season with a 30-27 victory in South Bend.

The Irish got off to a blazing-fast start, and within three minutes DeShone Kizer found Torii Hunter Jr. in the end zone to cap off a brilliant opening drive and put the Irish ahead 7-0. Five minutes later, following an incomplete pass by Kizer, Justin Yoon kicked a 37-yard field goal to give the Irish a 10-0 lead.

But the Irish offense was not done. Just two minutes later, Kizer found Equanimeous St. Brown with a 14-yard pass to give the Irish a commanding 17-0 advantage after the first quarter.

In the second quarter, the Irish offense cooled off. Five minutes in, Justin Yoon kicked a 26-yard field goal to put the Irish up 20-0, but the Hurricanes found some momentum. At this point, the flow of the game shifted entirely. Eight minutes into the second quarter, Brad Kaaya finished off a long drive with a two-yard touchdown pass to tight end David Njoku to get the Hurricanes on the board 20-7. The teams traded punts before heading into the tunnel with the Irish still ahead by 13 at halftime.

Miami, not Notre Dame, came out ready to play in the second half. Within seven minutes Mark Walton ran in from a yard, bringing the score to 20-14. Four minutes later, Michael Badgley kicked a 43-yard field goal to get Miami within three. Meanwhile, Notre Dame’s offense was completely nonexistent, punting the ball drive after drive.

The fourth quarter started out no better. Two and a half minutes in, Michael Badgley kicked a 38-yard field goal to tie the game up at 20. Then, in what essentially summarized the entire season, Notre Dame fumbled the ball in its own end zone, which was recovered by Miami defensive back Michael Jackson to put the Hurricanes ahead 27-20 with seven minutes left to play. Despite their hot start, yet again, the Irish had blown their lead. The shock from this, however, seemed to wake up and invigorate them.

Two minutes later, Josh Adams broke free and ran 41 yards for a touchdown to knot the game at 27. Then, in the dying seconds of the game, after a big drive, the Irish fumbled the ball on the five-yard line. Miraculously, Kizer recovered the loose ball, allowing Justin Yoon to set up for a game-winning field goal attempt. With half a minute left on the clock, Yoon drilled the ball between the uprights from 23 yards away to win the game 30-27.

Player of the Game: Josh Adam

This was the third win the Irish would earn in the 2016 season, and there exists no better game to display all of the the team’s shortcomings this year. Both offense and defense played relatively well for the first time in a while, yet both sides remained inconsistent. Special teams, on the other hand, continued to struggle immensely. This gamehave easily gone Miami’s way, but the luck of the Irish took over and saved the game.

Despite allowing a 27-0 run, the defense still played respectably. Going into the game, the Irish were ranked 125th nationally for sacks, taking down a quarterback only six times in their last seven games. However, against Miami, the Irish sacked Kaaya a season-high five times. After the game, head coach Brian Kelly addressed this, saying, “We do sack the quarterback here at Notre Dame. So for you guys that didn’t think that that happened, we do sack the quarterback.”

Kelly also addressed the team’s resilience in response to the team’s ability to recover from the loss of a large lead. “There wasn’t a belief, when I looked in the eyes of every one of those players, that they weren’t going to figure out and find a way to win.”

By taking down the Hurricanes, the Fighting Irish earned their third win of the season, moving to an overall record of 3-5. The 25th iteration of the Catholics v. Convicts series was certainly a captivating one, and arguably the high point of the season.