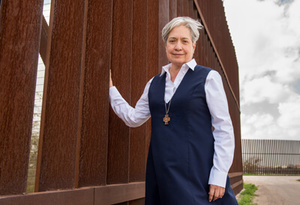 On March 11 the University of Notre Dame announced that Sister Norma Pimentel, M.J. will receive Notre Dame’s Laetare Medal — the oldest and most prestigious honor bestowed upon American Catholics — at Commencement on May 20. Established in 1883, the medal serves as an American counterpart to the Golden Rose, a papal honor conferred upon Catholics since the 11th century. The Laetare Medal has been awarded annually at Notre Dame to a Catholic “whose genius has ennobled the arts and sciences, illustrated the ideals of the Church and enriched the heritage of humanity.”

Pimentel is a religious sister with the Missionaries of Jesus and has been the Executive Director of the charitable arm of the Diocese of Brownsville (Texas) since 2008. While there, she has overseen emergency assistance, homelessness prevention, disaster relief, clinical counseling, pregnancy care and food programs for all four counties of the Rio Grande Valley.

In 2014 Pimentel was integral to organizing local response to the influx of Central Americans seeking refuge in the United States. This included establishing the Humanitarian Respite Center at the Sacred Heart Church in McAllen, Texas. The center serves as a waystop, mainly for women and children fleeing from extreme poverty and violence. It also provides asylum seekers with warm showers, bathroom facilities, beds, clothes, shoes, infant essentials, phone services and safety courses on traveling and living in the United States. The number of immigrants who receive assistance varies from 50 to 200 per day and, as of August 2017, more than 74,000 people have received help from the center.

Pimentel, an immigrant born to Mexican parents, remarked in a university press release: “I grew up entre dos fronteras, enjoying life in two countries, Mexico and the United States.” She said that in working with immigrant families brought to the convent by Border Patrol she “quickly learned the importance of living out our faith by how we welcome and protect those who need us.”

In 2015 Pimentel was recognized and personally thanked by Pope Francis for her work with immigrants in a virtual town hall meeting that was featured on ABC’s “20/20.” In awarding her the medal, Notre Dame aims to honor Sister Pimentel further for her crucial and compassionate work.