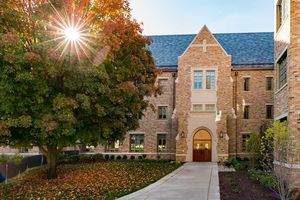 The University of Notre Dame prides itself on world-class undergraduate education and a highly unique residential life system for its students. The 31 single-sex residence halls serve as hubs of campus life, intramural sports, social events and school spirit. With strikingly different amenities and cultures, these dorms have shaped the distinctive college experience of students for decades. For many students, their dorm defines their years at the university.

For many, the decision to move off campus is a financial one. The cost of college is skyrocketing — the university just announced a tuition increase of 3.7 percent for next year — and many have found that cutting out room and board expenses by moving off campus can save them thousands. Room and board for the upcoming academic year stands at $7,445 per semester. With one meal valued at nearly $14, “rent” alone in a residence hall is $4,113 per semester, equating to roughly $1,000 per month. Most apartment complexes and rental houses near the university offer much lower monthly rates. Perhaps more notably, meals can almost always be had for less than $14, even at other on-campus eateries. It is very difficult (although not impossible) to spend more money on off-campus living than room and board.

Michael Burke, a computer science major and member of the 15 percent of the junior class living off campus, says saving money is a big plus. “At most, you probably spend two grand on food in a year, and we’re paying $500 a month… so we’re saving like $8,000 [a year] at least.”

For some, the financial decision comes down not to price but to value. In focus groups with off-campus students, Morgan found that many were dissatisfied with the discrepancy in dorm quality and knew they could find better amenities elsewhere. “People brought up, ‘Should I be paying the same amount as someone who lives in a nicer hall, when I can take that same amount of money and have a really nice apartment?’” Morgan says.

Many students move off campus to escape what Morgan calls “a culture of enforcement” on campus. “They don’t want people watching over them, don’t want the big brother ... that sense that someone’s telling me what to do, setting boundaries on my life.”

Brendan Mockler, a sophomore accounting major who plans to move off campus for his junior year, believes upperclassmen in the dorms are subject to overbearing supervision. “You’re not going to want to answer to an RA or a rector as a 21 year old,” Mockler says. “It’s not really a drinking thing. It’s a matter of trust, and the administration, if you’re on campus, doesn’t seem to trust you enough to look after yourself.”

Burke agrees. “If you wanted to convince me to stay on senior year, the university would have to provide housing that it wasn’t like someone was watching me as I lived. If I was treated more like an adult. Like parietals isn’t a huge issue, but if they just had housing with more freedom.”

Some students, Morgan found, forgo their senior year in the dorm to assume the duties of their hall’s “official” off-campus house. Off-campus houses emblazoned with huge Fisher “Fs,” Siegfried sigmas and other dorm symbols have been known to host parties and events for members of their dorm. Similar houses often exist for sports teams and clubs.

“In the focus group there were three off-campus hall houses: O’Neill, Sorin and Fisher. They said very honestly and thoughtfully, ‘we view moving off campus and living in this house as a service to our dorm and our dorm community’,” says Morgan. “They decided as freshmen or sophomores that they were going to be the ones to carry the off-campus house torch.”

According to Morgan, the university’s Division of Student Affairs’ interest in retaining seniors is twofold: They’ve noticed that off-campus seniors are less involved in campus happenings, and they consider seniors to be a valuable presence in the dorms.

“We believe fundamentally that seniors add to our community. And our campus is better when our seniors are involved,” Morgan says. “Halls are better when they have their senior leadership there, when they’re offering their wisdom, being mentors to underclassmen, contributing to the culture.” She’s also noticed an interesting phenomenon in senior-lacking dorms: “We find that when seniors exit, the hall is run by sophomores. Which is not in any way a critique of sophomores, it’s just different than having a senior be a leader.”

This culture of the off-campus rite of passage represents a break from past years in which staying on campus was the norm, not the exception. Today, many students have finalized plans for senior year off-campus housing before the end of their sophomore year. Morgan has been tasked with devising an action plan to keep students on campus for their entire undergraduate careers in an effort to reverse this trend. Within a year, Morgan hopes to release a proposal, which will include concrete plans for enticing seniors to live on campus.

“I’ve been asked to spend this whole semester thinking about student retention,” Morgan says. “So doing focus groups, listening to students, talking with different administrators to find out why people are moving off but also what would incentivize people to stay on campus.”

Proposed ideas for these incentives are incredibly varied. Morgan says they’ve examined the possibility of installing an on-campus apartment community for seniors. Structurally it could be similar to the current Fischer Graduate housing buildings, but culturally, it may be more like the Mods at Boston College — an enclosed community with its own set of rules tailored for older students. Morgan has also fielded suggestions for relaxed dorm rules, new senior leadership positions, more options for on-campus meal plans and others. Nothing is final yet, but expect the final version of the action plan to turn heads when it’s released.

“I really do believe that we have one chance to get it right,” Morgan says. “If we launch a bunch of incentives and no one cares, we’ve solved nothing.”