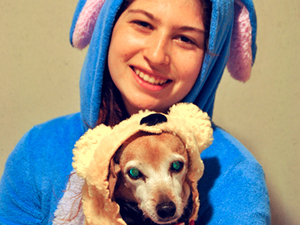 DOG DAYS Ellen Chaleff and her dog, Fred, work together at Notre Dame.

There’s an elephant in the room, and it looks like a dog,” junior neuroscience and behavior major Francis Fitzgerald says.

Fitzgerald is one of a slowly growing number of students on campus with service dogs. Service dogs meet a variety of specific student needs. There are guide dogs, hearing dogs, mobility dogs, medical alert dogs, psychiatric service dogs and autism dogs. The services they provide depend on the individual, their disability and their symptoms.

“I have a progressive auto immune condition that affects my nerves and the nerves in my legs, so Paddy is being trained for bracing and balancing, so to help with general mobility,” Fitzgerald says. “Right now I’m pretty much fully mobile, but because of the nature of my condition, we don’t know what I’ll look like tomorrow and what my mobility will be tomorrow, so that’s one way in which Paddy’s like a security blanket for whatever comes.”

“Besides the physical help he brings me and the sense of security I have because of him being everywhere with me, he’s also just become like my best friend in the whole world and best partner I could ever imagine, so I just feel so blessed to have him,” Fitzgerald says.

Senior anthropology major Ellen Chaleff also has a service dog. Rather than helping with mobility, Fred helps her with her bipolar tendencies. He is also trained to eat only when she does (so she remembers to eat) and can alert her before a panic attack comes on.

“I still have bad days and feel like I’m a failure when I have literally everything that could make me better. But having Fred has changed my life in such a positive way it’s more than worth it; we’ve been together only a year and I cannot imagine life without him,” Chaleff says.

There are challenges, however, that come with having a service dog. Senior gender studies major Faith Mayfield and her dog Angel were paired together in July so Angel could provide services as an autism service dog as well as other things, including some mobility and psychiatric help. They are working their way through the training process, which can be long and challenging, especially since Mayfield is training Angel on her own rather than going through a service dog organization.

Both Chaleff and Mayfield also noted that it was a long process to get Fred and Angel approved on campus. Before Chaleff, there was no policy in place for mental illness service dogs or for service dogs in the dorms, Chaleff says.

Another difficulty is dealing with businesses that try to deny access to service dogs despite the Americans with Disabilities Act (ADA). According to federal law, service dogs are allowed entry to all buildings, except some government buildings and operating rooms, Fitzgerald says. Additionally, storeowners are not allowed to ask people for documentation, ask them about their disability or require the dog to demonstrate tasks. They are allowed to ask two questions: Is this a service animal required because of a disability, and what work or task has the dog been trained to perform?

“I have run into issues where people are just ignorant to where service dogs are allowed to be and what the law is, and that can be really upsetting. Just because I’m not confrontational and it flusters me and I don’t like to upset people,” Fitzgerald says. One store manager in South Bend tried to tell her that only seeing eye dogs were allowed, and since ADA doesn’t require identification, there’s really no easy way to settle the matter.

Invasive questions, not only from store owners, are something Mayfield is struggling to get used to. In many ways, the visible dog invites questions into private lives.

“Ask questions just don’t be super invasive,” Mayfield says. “In general, I’m a very private person and don’t like to just be asked questions. It’s different when I know it’s coming versus when I’m walking through Walmart and someone stops me, when I’m trying to get eggs or something, and they’re like, ‘So, what’s your whole life about?’”

Fitzgerald and Mayfield also had to deal with resistance from their families.

“It was interesting. My dad loves dogs, but wasn’t always welcome to the idea of me having a service dog because he thought it would be more isolating. And my health and my condition already cause me to be removed from mainstream or normal life, so he was worried about that,” Fitzgerald says. Fitzgerald adds her family has come around and adores Paddy because of the happiness and comfort they see that he brings to her.

There certainly are difficulties, the least of which being the fact that big dogs like Angel and Paddy simply don’t fit sometimes — whether in a crowded football weekend Basilica Mass or on a plane. However, Chaleff, Mayfield and Fitzgerald all think the benefits far outweigh the costs.

Mayfield says she had a lot to learn but was excited at the idea of having a service dog. Her psychiatrist actually wrote her a prescription for a dog: “It’s great. I carry it around. I like it. I have a prescription for dog. It’s wonderful.”

Fitzgerald adds, “They can’t train a dog to do certain things. They just naturally do it, and Paddy just has this sense where he knows when I’m in pain. He knows when something’s wrong, and he just knows when he has to be there for me and be there in a really meaningful way.”