In this year’s student body election, one ticket promises new, aspirational, refreshing ideas. The other delivers more of the same.

Scholastic endorses Blais and Shewit. Their goals are lofty, but with their years of intensive student government experience, they know how to deliver.

Blais and Shewit say they’re most excited about their planned sexual assault initiatives. Most notably, they hope to implement an online platform called Callisto, which would allow students to more easily enter informal information about a sexual assault into a campus-wide database. They also pledge to change policy so that students who are expelled for sexual violence are not allowed on campus during the appeals process, and they plan to partner with St. Joseph Regional Medical Center for an on-call or part-time sexual assault nurse examiner who is trained to sensitively treat assault victims and collect physical evidence.

Fonseca and Narimatsu, on the other hand, are most energized about programs that aim to improve civil discourse, such as a discussion series called RouND Table and a social program called Irish Connection, which would connect otherwise unrelated student groups.

The most salient difference between the tickets is their experience level. Fonseca served as the first ever director of health and wellness in the cabinet of Student Body President Bryan Ricketts, and Narimatsu served as director of social concerns. But Blais and Shewit are old-timers in the innermost circle of the executive cabinet. Blais is vice president this year and was director of the department of internal affairs during her sophomore year. Shewit was Ricketts’s chief of staff during the spring semester.

Blais says, “In Bryan and Nidia’s cabinet, I learned how to work within the structure … but this year I learned how to buck that system.” She said she learned how projects can get sidelined or blocked but now understands how to cut through bureaucratic barriers.

Fonseca and Narimatsu say their campaign has a “student focus,” aiming to fill the communication gap that they see between student government and everyday campus life. Essentially, however, that means their platform focuses on programs that directly and literally involve students, rather than systemic changes that would be of greater consequence.

For example, they plan to connect students to South Bend by arranging restaurant discounts, bus tours and an “Introducing South Bend” event similar to a career fair. They also want to create posters and videos to educate students about recycling, and they aim to raise awareness for food waste by publicly weighing uneaten dining hall food.

Many of these programs have potential for success, but Fonseca and Narimatsu didn’t convince Scholastic why the bully pulpit of student government was necessary to achieve their goals. Fonseca says that with a presidency, he’ll be able to attract a wider range of students to these programs, but it seems many of the his proposals could be accomplished outside student government.

Blais and Shewit, however, are procedure-oriented. Blais is a self-professed constitution geek, and her impressive reform of student senate into a committee-based structure is evidence that she can overhaul processes in order to expedite results.

And while both tickets want to improve police transparency and publicize quarterly sexual assault statistics, only Blais and Shewit had plans to pressure the administration to release the total number of sexual assaults reported to the Office of Community Standards. Blais says that if all else fails, she'll help student media to gain access to that data. (Pressure will likely be necessary, considering the possible public relations consequences and Notre Dame’s prior reticence to release sexual assault data.)

A strength for Fonseca and Narimatsu is their political ideology, which spreads across the spectrum. Fonseca is a moderate, Narimatsu is liberal and their campaign manager, Madi Purrenhage, is conservative, they say.

Fonseca says, “You wouldn’t find us on the same ticket in public office.”

And while that apolitical approach may offer wide-ranging appeal, it also means they are neutral, or take no position, on issues such as whether the University Health Services should offer testing for sexually transmitted diseases. They noted there may be too many roadblocks to allowing STD tests on campus, considering the Catholic identity of the school, and instead they simply aim to provide students with more information about STDs.

Narimatsu says, “We didn’t feel comfortable promising [STD testing] because the roadblocks might be too big.”

Scholastic appreciates that Fonseca and Narimatsu only make realistic promises, but they also don’t promise much. Their mental health platform has three points: continue a partnership with Active Minds; publicize the services of the McDonald Center for Student Well-Being; and expand upon Fonseca's one-time project that, in 2016, collected student stories about mental health and posted them outside South Dining Hall.

Their physical health platform includes a pledge to have the school add the planned number of basketball courts (which, Fonseca concedes, the school has already promised) or encourage the school to add more, and a plan to encourage female students to share feminine hygiene products in public restrooms (though student government will not provide the products).

In comparison, the Blais-Shewit health platform includes plans for an outside audit of the University Counseling Center and a transition into a “long-term care model” which would cater to students with ongoing counseling needs. They would push for nighttime and weekend hours at St. Liam Hall, 100 percent handicap accessibility on campus and free STD testing that would not require health insurance or reporting.

Their goals are ambitious. The Blais-Shewit mission statement reads, “We will reach for new heights. Projects that were once deemed impossible will be made possible through our team’s experience, dedication and purpose.” Some ideas initially appear preposterous, such as subsidized rides with Lyft, or a reduced number of exams between Thanksgiving and finals week.

But Blais laid the groundwork for all her plans this year, whether through meetings, research or initial proposals. She’s already explored subsidized rides with Uber, and she has informally discussed the idea of lessening exams with professors on Faculty Senate. Rather than table the projects that began in her administration with Student Body President Corey Robinson, she is poised to continue what she started.

For Scholastic, the choice was clear. We hope we can see what Blais and Shewit accomplish.

This story was revised to refer to Fonseca's 2016 mental health project in the past tense; this was a one-time project, rather than an ongoing initiative.

The explanation of the Fonseca-Narimatsu plan for campus basketball courts was modified to add clarity. Fonseca and Narimatsu only encourage, rather than pledge, the construction of more basketball courts. Their only promise is to have the school build the number of courts currently planned.

This story was revised to reflect the fact that the Fonseca-Narimatsu platform includes no plans to pressure the administration to release comprehensive sexual assault data.

Click here to read more about the candidates running for student body president. 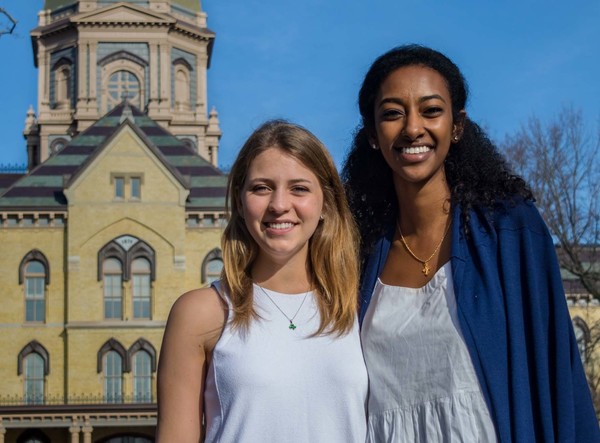