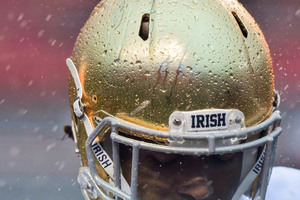 When describing the formidable environment of the Notre Dame-NC State game on Saturday Oct. 8, “harsh conditions” is an understatement. The Irish (2-4) took on the Wolfpack (4-1) hoping to make a statement and revive their season. Unfortunately for them, Mother Nature had other plans.

In the direct path of powerful Hurricane Matthew, North Carolina was hit with gushing 120 mile-per-hour winds and pouring rain. The sodden field at Carter-Finley Stadium in Raleigh, North Carolina, proved to be a daunting obstacle for both teams. The disastrous conditions led to 10 total fumbles and only 311 combined total yards of offense. Playing in the heart of the storm, ball security was an issue for both teams throughout the game.

Although the circumstances were less than ideal, both NC State and Notre Dame’s special teams stepped up to the challenge. With 1:29 left in the first quarter, NC State’s Kyle Bambard kicked a 38-yard field goal to put the Wolfpack up 3-0. In the third quarter, Notre Dame capitalized on a bad snap from NC State to provide ideal field position for a 40-yard field goal from Justin Yoon at 11:04. In the end, however, NC State came out on top with a game-winning play.

In the fourth quarter, the Irish offense went three-and-out due to the sloppy conditions. Tyler Newsome attempted a punt, but the harsh weather slowed down the entire operation. NC State’s Pharoah McKever blocked the punt, and Dexter Wright grabbed it and returned it 16 yards for the game-winning touchdown.

In a final attempt, Notre Dame put together a drive into the NC State red zone, but a shotgun snap on fourth-and-8 went past DeShone Kizer with 1:52 left. The Wolfpack proceeded to run out the clock and clinch the victory.

The Fighting Irish offense managed only 113 total yards on 64 offensive plays, and had just 41 yards through three quarters. Kizer was sacked five times and was 9 of 26 for 54 yards. He had a stretch of 12 consecutive incompletions. With the Fighting Irish driving for a game-tying touchdown, his receivers dropped two straight passes.

Kizer said, “You can’t prepare for this. You don’t get this up in South Bend, Indiana. You can use wet balls. You can do whatever you want to prepare yourself mentally, but until you’re here with sideways rain there’s nothing you can do really to get yourself prepared for that.” This game turned out to be the worst of his career.

Irish head coach Brian Kelly, said, “We don’t have any excuses. We were atrocious offensively.”

The stormy conditions actually helped the underperforming Irish defense post their best numbers of the season. After allowing at least 489 total yards to every Power Five opponent they had faced, they gave up just 198 yards in this game. Sophomore defensive lineman Jerry Tillery was a standout player for the Irish. He posted a career-best nine tackles, including five solo and one for loss. Coach Kelly gave his defense some credit by saying, “I was very pleased with our physicality, toughness, and tackling.”

Player of the Game: Hurricane Matthew

After Notre Dame’s fourth loss in six games, Irish fans grew frustrated and critics were quick to blame Kelly and his staff. Kelly admitted to some coaching problems when he said, “I feel terrible that we let [the players] down. You want to make the right call, you want to put them in the right position.”

One fatal coaching decision occurred on the blocked punt that determined the outcome of the game. Notre Dame had only two players back to protect Tyler Newsome. The Irish normally use three but slimmed down for its new rugby-style punting. However, Newsome opted for a conventional punt, and three North Carolina State players took advantage. “Maybe we should have been in a three-man wall there instead of rugby,” Kelly said. “You second-guess yourself in games like this when your team is ready to play and excited to play.”

Getting 11 players at a time to play in sync for the 60-minute span of the game has proven to be a difficult challenge for the Irish. Even though the Irish defense saw improvement and success during the game against NC State, the offense fell short. “You win together and you lose together,” Kelly said after the game. “We’re looking for wins, not improvement on one side of the ball or the other.”

A common critique of the Irish this season was that the Notre Dame offense needed to finish strong. Kelly said in a press conference, “We just lack that ability right now, that maturity, that toughness, that thing that you can’t put your finger on, that ‘it.’ We got to have that late in the games.”

“We’re looking for wins, not improvement on one side of the ball or the other. Although, I was very pleased with our physicality, toughness and tackling, I’m just extremely disappointed in the offensive execution and lack of ability to manage the snapping of the football — which was atrocious as well.”