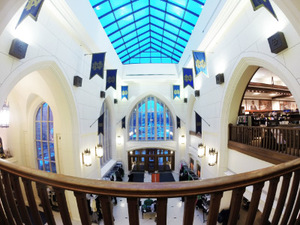 They don’t march down library quad with the band, but they are equally prepared on game day. When the Notre Dame Bookstore clerks take the floor, it’s game on.

“We prepare like the football team,” David Werda, Hammes Notre Dame Bookstore director, says. “We have a game plan. We execute, and at the end of the weekend, we’ll sit down and we’ll evaluate the success and the failures and the opportunities that exist for the next one.”

And just like the football team, the bookstore staff brings its A-game for swarms of cheering fans. Werda says Notre Dame season tickets have a higher turnover than any other football stadium in the country, which means new fans use those tickets every game.

“We’re a destination point for people who come to a Notre Dame football game, so the experience needs to be top notch.” 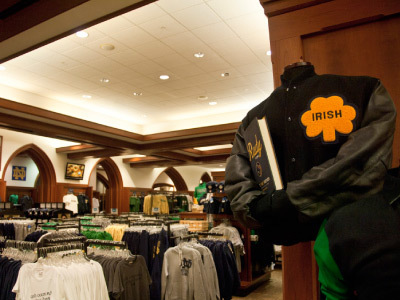 Werda says the bookstore is the major point of contact many visitors have with the university. The bookstore is often the first place fans visit on game day or the last place they visit before they leave.

The bookstore doesn’t want crowds to ruin the customer experience. Werda says, “We want to provide that Disney-like experience, where it’s a happy place. It’s a fun place. Yes, it’s busy, hectic, chaotic, but at the same time, we still want to provide this same level of customer service that you would experience [when the store isn’t crowded.]”

At the end of the summer, while the football team is preparing for the first football game, so is the bookstore.

Customer service is the store’s cure-all. They even use it to fight theft. “The way that we like to combat shoplifting is essentially with customer service. The more people we have on the sales floor, helping customers find what they need, the less shoplifting that we typically incur,” Werda says.

While employee availability is one method, the bookstore has a specific team devoted to stopping theft: the asset protection department.

“There are cameras throughout all of the stores, and there is a staff that focuses specifically on our asset protection,” Werda says. “[During football weekend] we have greeters.”

Werda says all of this improves the customer experience and minimizes loss from theft.

“Shortly after [the Hammes bookstore] was built (in 1998), we had already outgrown it. It’s 70,000 square feet and there aren’t enough bathrooms.” Werda says. “There isn’t enough retail space.” 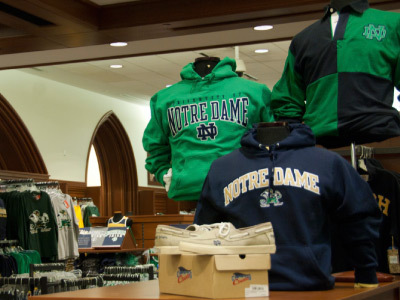 Five years ago, Notre Dame added another bookstore on Eddy Street. Werda says the new store caters to a slightly different market. “It’s a different customer. I think what you see over on Eddy Street on a football weekend is typically the customer that’s already been to the bookstore. It’s a different shopping experience. It’s not quite as crowded, although it’s getting busier and busier.”

The facility is also improving for yearlong students. This fall, the Hammes Notre Dame bookstore swapped its old café, Irish Ink, for an Einstein Bros Bagels. “I think it’s been a phenomenal addition to the bookstore,” Werda says. “We love the additional foot traffic of students.”

Werda is excited to see students spend more time in the bookstore. “Because we spend so much of our time looking for ways to maximize and provide great service to the guest that comes here for football,” he says. “We have a harder time finding ways to give the bookstore back to the students.”

In the past, students viewed the bookstore as a place to buy textbooks, and little else. The Hammes Hub, a technology store within the Hammes Bookstore, was the first attempt to draw students back in.

Werda says, “It’s nice to see students back in the bookstore just hanging out, getting a bagel sandwich.”

Werda hopes students will shop at the Notre Dame Bookstore when buying textbooks and merchandise. He says, “A portion of those proceeds go directly back to the campus community. Every dollar spent here, a portion of that goes back to the general fund, to scholarships, to faculty and staff wages, to campus development funds. When you buy something from Walmart, that’s not necessarily true.”