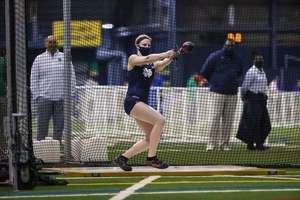 The Notre Dame men’s and women’s track teams traveled to Clemson Feb. 25 to 27 to participate in the ACC Indoor Championships. Both squads looked to build off strong performances in the 2020 championships, which saw the women finish third and the men finish fourth.

The competition got off to a strong start for the men on Thursday. In the 5000 meter run, junior Kenny Vasbinder finished third, and fellow Irish teammate Matthew Carmody finished fifth. In the weight throw, senior John Stefan finished fourth. The most impressive performance of the day, however, was junior Colton Crum, who took home first place in the pole vault.

The women saw some success on Thursday and Friday as well. Senior Rachel Tanczos finished second in the weight throw, a mere 0.05 meters off first-place finisher Makenli Forrest of Louisville. The pentathlon concluded Friday with impressive results from Irish freshmen. Jadin O’Brien took home second place, while fellow freshman Alaina Brady netted sixth. The strongest event of the pentathlon for the pair was the shot put, where O’Brien took first and Brady took second.

The Irish teams continued their success on Saturday. For the men, junior Samuel Voelz finished second in the 800 meter, while Carmody and Carter Cheeseman finished third and seventh, respectively, in the 3000 meter. On the women’s side, junior Anna Sophia Keller finished eighth in the one mile, and Olivia Markezich finished fifth in the 3000 meter.