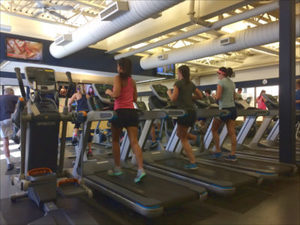 At Notre Dame, there is a longstanding tradition of athleticism and fitness. Father Sorin emphasized recreational activities, which continued to grow with the university. According to RecSports’ website, in 1983, RecServices (the forerunner of RecSports) offered 22 programs during its first year. In more recent years, a staggering percentage of the Notre Dame community has taken advantage of the recreational opportunities offered. RecSports now offers 482 programs a year, a figure which reflects student, faculty and staff interest and enthusiasm for fitness and sports.

But with so many students eager to stay fit, there is question as to whether the Rockne Memorial and the Rolf’s Sports Recreation Center have enough space and equipment to meet the large demand. This is especially an issue in the winter. When outdoor exercise is very limited, these facilities often get overcrowded during peak hours.

“Notre Dame has a lot of smart, hardworking kids obviously. And most people are athletic and in pretty good shape,” sophomore finance major Tom Moster says.

Mark Williams, Director of the Office of Recreational Sports, speaks of the uniqueness of Notre Dame students with regards to fitness.

“I would say this is the most fit campus I’ve ever been on. This is my fifth Catholic school, and the numbers we have for participation are unheard of. When I talk to my colleagues, some are 60 [percent campus recreation RecSports participation], some are 80, but to be in the 90s like we are consistently…Notre Dame students are special.”

At times, students struggle to get equipment when they want to use it.

“Sometimes when I go to the Rock to use a treadmill or play basketball, all the treadmills are taken or the courts are all occupied. If I wait long enough I can get access to both, but it can be frustrating,” sophomore biology Stephan Hu says.

Both Williams and Assistant Director of Fitness and Fitness Facilities Jennie Phillips acknowledge that overcrowding can be an issue at times.

“I think that because we have such an active campus that space is a challenge…and looking at our weather, you’re limited outside for so much of the school year that coming in here [Rolf’s] or to the Rock is really important. Do we get really crowded and sometimes run out of individualized equipment? Yes. It is the nature of the beast,” Phillips says.

“For the demand and the culture that we have, we need to be a little larger…you can never give us too much [space]. We’ll always figure out a way to use it. But here more than any other place I’ve ever worked, there is the need. It will be used,” Williams says.

For those students that consider a lack of space and equipment to be a problem, help is on the way in the Campus Crossroads Project, the largest building initiative in the 172-year history of the university. Expected to be completed by August 2017, the 800,000 square foot project will include a new recreational center located on “levels three and four” of the new facility.

Rolf’s will become the practice home for the men's and women's varsity basketball programs. Although Williams and Phillips appreciate what they have in Rolf’s, they believe the Campus Crossroads recreation center will be a significant improvement.

“The quantity and the quality without a doubt will definitely be an upgrade…there will be a lot more activity space for programs, and there will be quadruple the equipment of here [Rolf’s],” Williams says.

“At Rolfs, we have a little less than 5,000 square feet of fitness space. Over in the CCP [Campus Crossroads Project], we’ll be upwards of around 20,000 square feet of fitness space. There will be ample opportunity to find equipment even at the peak times. We’ll also have a cycling and personal training studio and track, as well as great functional space where people can do their own thing,” Phillips says.

While the pair is concerned about recreational space for basketball, with only one court planned, they believe the university will resolve the issue.

“As on every college campus, lots of court space is a challenge and will be at the Campus Crossroads Project.  However, we are working with campus partners to address the issue so that we are still able to provide for the needs of our community,” Phillips says.

Regardless of the quality of Notre Dame’s recreational facilities, Williams and Phillips appreciate the thing that truly defines the school’s fitness and recreational experience: the students.

“We feel as an office that we’re really lucky that we’re so ingrained in the students’ lives…Father Sorin was very passionate about physical education, recreation, and physical activity, so it’s pretty neat that that passion still comes through today through our office,” Phillips says.