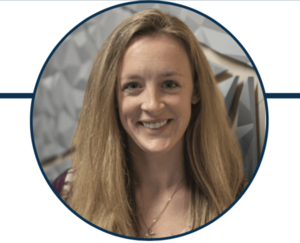 Impacting women in every corner of the globe, intimate partner violence (IPV) and its ramifications span generations. According to Laura Miller- Graff Ph.D., class of 2008, approximately one in four women in the U.S. are victims of IPV and exposure is most common among pregnant women and mothers.

In September, Miller-Graff, assistant professor of psychology and peace studies, received a $2.5 million grant to expand her research on group therapy programs for pregnant women exposed to IPV. The National Institute of Child Health and Human Development awarded the grant to Miller-Graff as well as University of Memphis’ Kathryn Howell. Their research explores how these intervention groups mitigate the long-term effects of violence while the mother is still pregnant.

Partner violence has an impact on both the mother and the unborn child. According to Caroline Scheid, a fourth-year clinical psychology graduate student working in Miller-Graff’s lab, violence can harm the development of the child and can lead to emotion regulation challenges and fussier babies. It puts women at a higher risk for mental health challenges and difficulty coping with the trauma.

In the pilot study, the research team “saw women in the treatment group had a greater change in their symptoms of depression post-treatment, had lower rates of revictimization and had infants who had better developmental outcomes than women who were in the control group,” Miller-Graff said.

The pilot study followed treatment groups in South Bend and Memphis. The new grant will expand this research further, supporting a larger randomized trial of the program and comparing the pregnant mother’s program to a social support group.

“We’re able to ask the question, not just ‘does the program work compared to nothing?’ but ‘does the program work compared to another type of service that women might typically receive?’ It will also allow us to discern, is it something about the program’s content specifically that matters, or if it’s just the fact that women have the opportunity to get together and talk to one another and receive support that matters,” said Miller-Graff.

Miller-Graff began researching the effect of violence on women when she was a graduate student at the University of Michigan. There, she worked with Sandra Graham-Bermann, who developed the Moms’ Empowerment Program to support mothers with older children who had been exposed to violence. When working with the children, she realized that many suffered challenges due to years of exposure to violence.

As a peace studies professor, Miller-Graff recognizes that the impact of violence is a global issue that is influenced by many social structures.

“Of course, it’s really critical to recognize that women’s experiences of violence in terms of their social experiences of it and the effects that violence has varies across contexts depending on the systems that are in place to respond to it or not.”

The threat of homelessness, for instance, can force domestic violence victims to make difficult sacrifices, Miller-Graff said. When mothers experiencing violence have nowhere to go or nowhere to stay, they are forced to choose between homelessness and staying with an abusive partner.

“Without considering that, it can make it seem as if women are choosing to stay with a partner when in fact, they don’t really have a choice,” she said.

“When I came to Notre Dame and started my job here, one of my interests was, how do we back up the clock and think about preventing children’s exposure in the first place?"

Because such factors can have an unseen impact on violence, she emphasized that it’s important to address problems with the social systems underlying domestic abuse.

Miller-Graff acknowledged the communal effort that goes into combating such a complex issue and implementing a program like PMEP. Among her research team at Notre Dame are five graduate students and 15 undergraduates. Caroline Scheid has been working in her lab for 6 years, starting when she was an undergraduate at Notre Dame.

As her work carries on with Miller-Graff, Scheid continues to see the difficulty of balancing the challenges and stresses of life while working to foster a positive future for one’s family.

She is able “to see it first-hand with some families and how much they’re working to do what they can and the best they can in those situations.” With Miller-Graff and the new grant, Scheid will have the opportunity to do more of that.

“Our goal,” Miller-Graff said, “is to think through in a very systematic way how we connect them with other resources that are important for their continued wellbeing.”